Sir Charlie Bean said policymakers should have acted in November, or earlier, as the economy showed signs of overheating.

The Bank of England failed to act quickly enough to hike interest rates as rampant inflation took hold and will now have to “move faster” with further rises, the Bank’s former deputy governor has warned.

Sir Charlie Bean, who was deputy governor for monetary policy throughout the financial crisis and a recently-retired member of the UK’s fiscal watchdog, criticised the Bank’s decision to hold off from raising rates until December.

He told the PA news agency that policymakers should have acted in November, or earlier, as the economy showed signs of overheating.

But Sir Charlie, who retired from the Office for Budget Responsibility (OBR) at the end of last year, said the Bank was powerless to influence energy prices and that the Government needs to step in and help ease the cost of living squeeze.

The Bank’s Monetary Policy Committee (MPC) increased the cost of borrowing from 0.1% to 0.25% last month, the first hike for more than three years, as it warned that inflation was set to reach 6% in the spring.

It came after the Bank caught financial markets off guard when it kept rates unchanged in November, despite having laid the foundation for a rise.

Sir Charlie said the Bank’s rates stance “has erred too much towards looseness through the course of the past few months”, adding that he was “surprised” by the decision to hold off in November.

“If I was on the MPC, I would have been in favour of moving a little bit earlier than they have done,” he said.

He said a strong economic bounce-back and resilient jobs market despite the end of the furlough scheme would have supported a rate rise before December, potentially even months earlier.

While he said it was not a “significant policy error” made by the Bank, it would likely mean rate-setters have to “move faster” with further increases as inflation has already soared to its highest level for nearly 30 years.

Experts now predict another rate hike to 0.5% at the Bank’s next meeting in early February, which would mark first time the MPC has made back-to-back increases since June 2004.

At least another rise is also expected by the end of the year.

Sir Charlie, also a professor at the London School of Economics, warned the Bank’s action would not be able to prevent an inevitable hit to household finances from rising inflation and the upcoming April increase in National Insurance.

The latest data has revealed that wages are already failing to keep up with steep rises in the cost of living.

“Living standards for people in this country will be lower,” he said.

“It’s certainly going to come as a shock to consumers as we go through the first part of this year.”

He said with Bank action taking two to three years to feed through, “it is only the Government through it’s various fiscal tools that can do anything there”.

Sir Charlie also cautioned over a hit to UK economic growth of up to 2% from the Omicron variant of coronavirus and the restrictions imposed before Christmas.

He said the UK may be heading for a contraction in the first quarter as staff shortages have taken their toll and hospitality firms suffer.

But with Plan B coronavirus restrictions now ending, he said this impact would quickly “unwind” as growth rebounds. 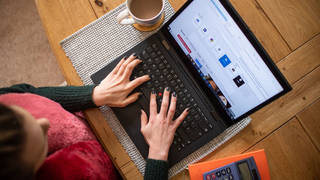