An Efit of a man who, along with another man, stole an 87-year-old woman's life possessions in a "cowardly" distraction burglary.

The victim was home alone at her property in Woodberry Down Estate, Hackney, when the two men visited, claiming to be from a water company.

The pair said they needed to check the water pipes, and while one of them waited in the kitchen distracting the victim, the other man was alone in another room.

Several minutes later the man returned, telling the elderly woman the problem had been rectified.

The pair left the address and shortly afterwards the woman discovered that her bedroom had been "ransacked".

The woman, extremely distressed and upset, then contacted her neighbour, who immediately phoned the police.

A witness gave a description of one of the men, who they saw fleeing the scene, and police have since complied an Efit image from the description. 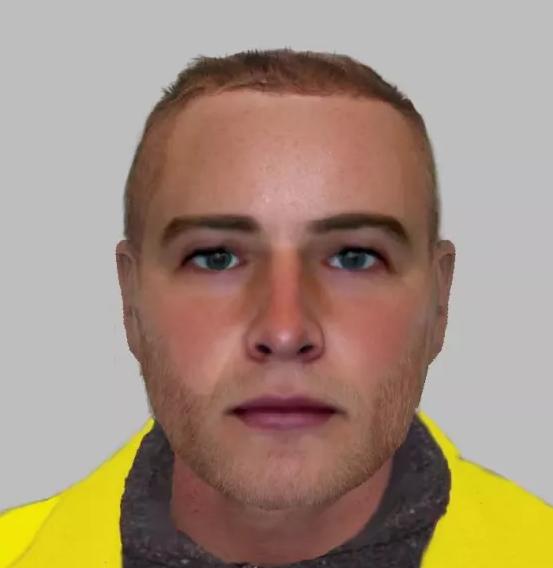 Police are searching for a man who fits this description.

The men have been described as white, in their 30's. The first was slim build with short blonde hair and the second as stocky build with dark hair. Both men were wearing high visibility jackets. The Efit released is of the second man.

The Met Police say the woman has been left devastated by the raid, in particular by loss of sentimental jewellery, which includes a gold sovereign on a chain with the inscription 'Elizabeth 1967', a diamond solitaire ring with a gold band, three stone sapphire ring, thirty inch gold chain, ruby ring with a gold band and a woman's wrist watch with a small face and gold strap.

Det Insp Paul Ridley, of Hackney Criminal Investigation Department is leading the hunt for the suspects and said: "We are appealing for information from anyone that recognises the image of the suspect on the e-fit to contact my investigation team as a priority.

"I also need to know whether you have been offered any items of the distinctive jewellery, perhaps in a professional capacity at a pawnbrokers or jewellers or noticed it in someone's possession.

"This is a despicable and cowardly crime targeting an elderly widow and stealing her life possessions. If anyone has experienced something similar to this we would urge them to come forward.

"I can personally assure you that all information received will be treated in the strictest of confidence and immediately acted upon."

Police are reminding people to always verify the identity of anyone that comes to their door, if they are genuine then they will be able to provide identification. If in doubt do not let them in and call 999.

Anyone that can assist police is urged to contact the police non-emergency number 101, or by tweeting @MetCC.

To give information anonymously contact Crimestoppers on 0800 555 111 or visit crimestoppers-uk.org. If the information you supply to Crimstoppers leads to an arrest and charge, you could get a cash reward of up to £1,000.