It's not long since their "Beach Body Ready" poster landed Protein World in hot water. Now they're being attacked again for a poster featuring a scantily-clad Kardashian.

The ad, promoting a weight loss protein scheme and featuring Khloe Kardashian in a revealing leotard, has appeared at Tube stations across London.

And like the campaign from 2015 for the same company, it's causing uproar on social media:

Poster advert showing Khloe Kardashian in a leotard is being criticised over claims it could affect people's body confidence. pic.twitter.com/yAwy3WLpgP

Not a happy sight on way home every evening, @TfL. The state of this advert, 2017  pic.twitter.com/LddiWmSCGq

What a contrast - one advert designed to empower women and the other designed to feed on insecurities #thisgirlcan pic.twitter.com/0bOPBF00ry

Can I keep up with a Kardashian? Better than you can keep up with feminism, mate. #StickIt @TenderUK @Callmesaina1 pic.twitter.com/5CYVTjmU0G

In 2015, the supplement company's Are You Beach Body Ready? campaign caused a similar storm when it appeared around the London Underground network - and was swiftly defaced by campaigners who accused it of "body shaming": 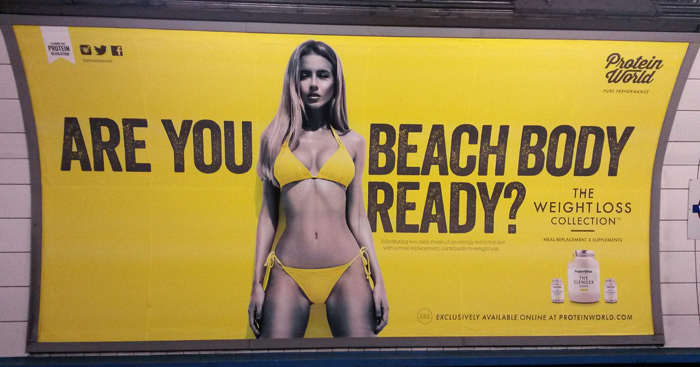 How far can you travel now in lockdown?

Harry arrives back in UK for Prince Philip's funeral without Meghan

Prince Philip: Politicians across UK to pay tribute to 'grandfather of nation'