This Is How Donald Trump Defended Lewd Comments About Women 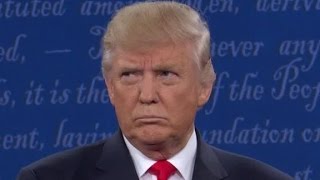 Trump: I'm not proud of tape about groping women

Hillary on the attack, Donald on the defensive - this is the explosive moment that the Republican presidential candidate had to answer for his deeply offensive comments about women.

Ever since the so-called "Trump Tapes" emerged on Friday, Clinton had kept silent while Trump had issued an apology to his family for a string of offensive comments about women.

So at the debate, the stage was set for a showdown on the subject and it did not disappoint. First up, host Anderson Cooper asked Trump to respond to the clip.

Then, it was Hillary's turn. Her verdict? The tapes show the true Donald:

That wasn't the end of the issue though, as Trump brought up Bill Clinton and accused him of sexual misconduct.

"Mine were words, his was action," he said.

"What he's done to women, there's never been any body in the history of politics in this nation that's been so abusive to women."

He said Mrs Clinton "should be ashamed of herself" for her support of her husband.

Just before the debate, the Republican staged a much-discussed press conference with women who accuse the former President of taking advantage of them. During the debate, Trump went straight for the jugular on the issue while defending himself: