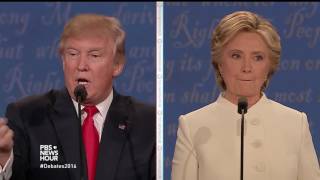 Trump doesn't pledge to accept the election outcome: 'I will look at it'

"I'll keep you in suspense". That was Donald Trump's extraordinary answer when asked if he would accept the result of the US Presidential election during last night's debate.

Despite his daughter Ivanka and running mate Mike Pence saying that they would concede defeat if Hillary Clinton won, Trump refused to confirm that he would.

"I will look at it at the time," said Trump, before alleging the election was being rigged against him. "What I've seen, what I've seen is so bad.

Moderator Chris Wallace said that US politics always sees the loser concede to the winner. "I'll keep you in suspense," replied the Republican.

The Republican candidate continued to insist that there was widespread evidence of fraud and "rigging" of the election.

Hillary's reaction to Trump's refusal to accept the election would be a fair one? "Horrifying."

Clinton pointed out other occasions when Trump has claimed things were "rigged" against him - including when he didn't win an Emmy for The Apprentice. "It's funny, but it's also really troubling."

EU criminals could be barred from entering the UK post-Brexit

Within reach: UK and EU edge towards Brexit deal

'Children will be hungry': Minister confronted on rejection of free school meals

Scientists discover symptoms which predict Long Covid, which affects 1 in 20