Trump: Clinton Doesn't Have The Stamina To Be President 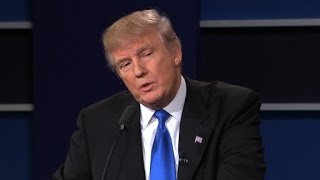 Trump: Clinton doesn't have the stamina to be president

In one of the feistiest exchanges of their US Presidential debate last night, Donald Trump questioned whether Hillary Clinton had what it takes to be in the White House - and you can see her reaction here.

Towards the end of the debate, which many commentators are saying Clinton won, Trump was asked about his comments recently that Clinton didn't have the "look" to be President.

Did he back down?

"You have so many things that you have to be able to do and I don't believe that Hillary has the stamina."

Clinton waited patiently during the comments, then responded: "As soon as he travels to 112 countries and negotiates a peace deal, a ceasefire, a release of dissidents, an opening of new opportunities in nations around the world or even spends 11 hours testifying in front of a Congressional Committee, he can talk to me about stamina."