Boris Johnson's office says he'll be back at work on Monday - two weeks after leaving the hospital where he was being treated for Covid-19.

A Downing Street source has said the Prime Minister is "raring to go," and met colleagues yesterday to discuss the coronavirus crisis.

The Prime Minister has been recovering at his official country residence in Chequers after being released from St Thomas' Hospital in London.

He is understood to have held a three-hour summit meeting with Foreign Secretary Dominic Raab - who has been deputising for him - and Chancellor Rishi Sunak on Friday ahead of his return.

A source said: "Mr Johnson was updated on the progress being made in the UK’s fight against Coronavirus and was given a detailed briefing on the policy work carried out so far on the next phase of our fight against the disease.

The Prime Minister has also held a series of Zoom meetings with his top advisers as well as a daily video call with acting Prime Minister Dominic Raab.

Covid-19 booster jabs: Who is eligible and how can you book? 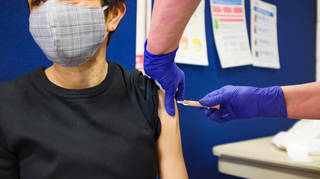 Omicron: All adults to be offered Covid booster jab by end of January, PM confirms

What time is Boris Johnson's press conference and what is he expected to say?

'All we want for Christmas is for everyone to get jabbed', says care minister

Survivor of Channel tragedy: We held hands to try and stop each other drowning

Vet calls for urgent medical care for elephants in Pakistan

LBC Views: If Omicron resists the vaccine, Ministers have flexibility to go much further

Watch in full: Nick Ferrari speaks to Ghislaine Maxwell's brother ahead of trial