Half of exporters are struggling to adapt to changes made to UK-EU trade since the start of the year, according to research.

The survey, which involved 1,000 mainly small to medium-sized businesses, found exporters had been facing difficulties with a myriad of common concerns, such as increased admin, costs and delays.

There was also confusion reported about which rules were necessary to follow.

According to The British Chambers of Commerce, which carried out the survey, the difficulties can be attributed to the late timing of the UK-EU trade deal, which it says left details out until "the last minute".

"Trading businesses, and the UK's chances at a strong economic recovery, are being hit hard by changes at the border," said director-general Adam Marshall.

"The late agreement of a UK-EU trade deal left businesses in the dark on the detail right until the last minute, so it's unsurprising to see that so many businesses are now experiencing practical difficulties on the ground as the new arrangements go live.

"For some firms these concerns are existential, and go well beyond mere 'teething problems'. It should not be the case that companies simply have to give up on selling their goods and services into the EU."

Mr Marshall said ministers must now do everything they can with the EU to solve the "knotty issues" hampering trade on sides - and stressed the timescale for additional changes should be reconsidered.

He said: "This situation could get worse if the UK sticks to its guns and introduces additional checks in April and full customs checks on imports in July.

"These timescales need to change and the support available for businesses who are battling to adapt to new trading conditions significantly increased."

A government spokesman, meanwhile, pointed to current support in place for businesses facing difficulties with the new rules, including helplines and webinars with a network of 300 international trade advisers.

He added: "We will ensure businesses get the support they need to trade effectively with Europe and to seize new opportunities as we strike trade deals with the world's fastest growing markets and explore our newfound regulatory freedoms."

Rachel Reeves, shadow chancellor of the Duchy of Lancaster, said: "This Government ignored British industry during negotiations, gave them a matter of days to prepare for the deal and now downplays the real challenges many exporters face.

"Rather than provide practical help, the Conservatives have wrapped businesses in more red tape and higher costs, and put contracts and jobs at risk." 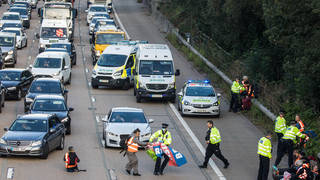