Police have launched a manhunt after a convicted killer escaped from an open prison in Gloucestershire.

Jason Mills, 49, attended Bridewell Police Station in Bristol on Wednesday morning but then failed to return to HMP Leyhill, a category D prison, as required, according to Avon and Somerset Police.

The force are asking the public not to approach him if they see him but instead call 999 quoting reference 5222081856.

People can also ring 101 with any other information.

Mills is known to have links to Essex, where the offence took place.

Mills was jailed for murder in 2001 after being convicted of killing his girlfriend Toni Mills.

The court heard the 24-year-old mother-of-one had been subjected to a vicious attack, suffering bruising, a blow to her abdomen and serious head injuries.

She died of her injuries in hospital two days after the attack.

After Mills was convicted on a unanimous verdict, the court heard he had 99 previous convictions, mainly for theft and dishonesty.

He had also threatened his former girlfriend with a knife.

Mills was housed in a category D prison, also known as an open prison.

These type of prisons have "minimal security" and permit "eligible prisoners" to spend most of the day away from the prison, for example for work or education purposes, according to the Government website.

It adds that only prisoners "who have been risk-assessed and deemed suitable for open conditions" will be housed there.

It comes just weeks after "extremely dangerous" sex offender Paul Robson escaped from an open prison in Lincolnshire, sparking debate about whether individuals convicted of certain crimes should be eligible for open prison at all. 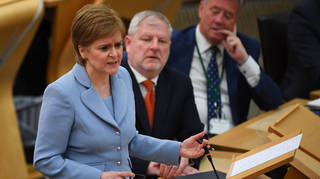