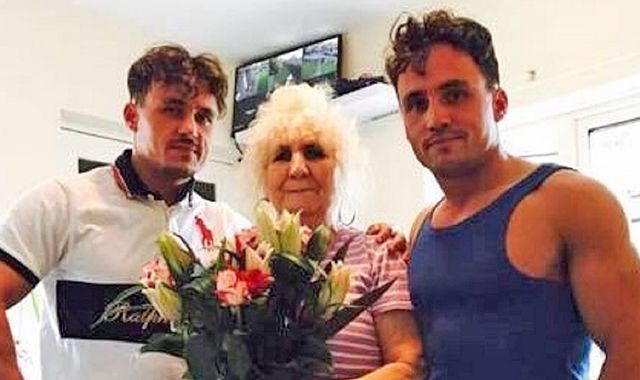 Hundreds of people have gathered to pay their respects to twin brothers who starred in My Big Fat Gypsy Wedding.

Billy and Joe Smith, who were on the Channel 4 reality show in 2014, died in a suspected double suicide just three days after Christmas.

On Friday, their coffins were taken on a two-mile journey in white horse-drawn carriages from their grandmother's house to St John the Baptist Church in Sevenoaks, Kent.

Mourners lined the town's high street in silence, with one woman kissing a picture of the brothers through the carriage glass.

The bodies of the two tree surgeons were found in a country lane on 28 December.

They had celebrated their 32nd birthdays just two weeks earlier and a coroner was told a relative had found a suicide note.

A poem from the pair's friends printed in the order of service expressed an "emptiness" and reminisced about an outing to McDonald's in which no would could "keep a straight face".

"To the boys from your closest friends, words will never be able to convey, the emptiness we feel today," it read, adding: "And then there would be the outings to McD's, asking for a roast dinner, your face dead straight, while the rest of us could barely keep a straight face."

Co-star Paddy Doherty, who won Celebrity Big Brother in 2011, paid tribute to the "two good-looking boys" in a video message and said their deaths were a "terrible tragedy".

A Facebook memorial page liked by more than 10,000 people was filled with messages ahead of the funeral.

Such messages from all over the country spoke of "two beautiful young souls" and said they hoped they would "rest in God's home in heaven in eternal peace."

:: Anyone feeling emotionally distressed or suicidal can call Samaritans for help on 116 123 or email jo@samaritans.org in the UK. In the US, call the Samaritans branch in your area or 1 (800) 273-TALK.