Britain is scrambling to recover the advanced F35 stealth jet that crashed into the Mediterranean – with fears Russian forces are looking for it too.

The pilot safely ejected from the £100m plane, dubbed the Lighting II, which has sunk beneath the waves.

The Times said that British forces could salvage the aircraft but an American team is closer, with the US having been called in to help.

But it is feared the Russians are also looking for it, with the highly-advanced aircraft riddled with classified technology.

The Times quoted a Navy source as saying the Russians would be "foolish" not to be watching the zone where the fighter crashed.

However, it is not thought Russian salvage teams are in the area.

The advanced F35s are state-of-the-art fighters which are designed to penetrate enemy air defences, and include a raft of advanced systems and sensors.

The UK uses the "B" variant, which can hover vertically, allowing it to take off from shorter runways like aircraft carriers.

They have been embarked aboard the Queen Elizabeth, the enormous £3 billion aircraft carrier Britain has sent on a major deployment to the Far East and back.

Prince Charles was due to visit the carrier following his trip to Egypt, but that part of his tour has now been cancelled.

The carrier group, which includes destroyers, recently made its way up the Suez Canal and into the Mediterranean.

The crash happened at about 10am UK time on Wednesday.

An MoD spokesman said then: "A British F35 pilot from HMS Queen Elizabeth ejected during routine flying operations in the Mediterranean this morning.

"The pilot has been safely returned to the ship and an investigation has begun, so it would be inappropriate to comment further at this time." 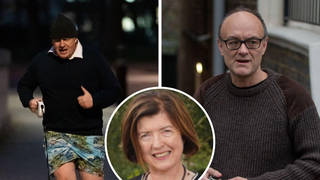