An illegal gathering held outside the Welsh Parliament in Cardiff Bay has left the area "littered with rubbish" after hundreds attended the party.

A spokesperson for Cardiff Council said clean-up teams had to clear "a significant amount of rubbish" that had been left behind "by large groups of people intent on breaking Covid-19 restrictions".

They said bins had been left unused and the ground was left "littered with rubbish", meaning council staff had been on site since around 4:30am tidying up the mess.

Several hundred people were seen attending the illegal gathering outside the Senedd on Friday night.

Glass bottles and laughing gas canisters were scattered across the floor and had to be tidied up by street cleaners on Saturday morning.

Three arrests were made as police urged people to "be sensible and not to breach the rules" in order to avoid "a third wave of infections".

It was the third time this week that revellers had gathered outside the building, with locals hitting out at attendees on Twitter.

LBC reporter Peter Gillibrand said the scenes were "like a nightclub" and that he witnessed a fight break out as people drank alcohol.

He added that the area had been left "absolutely trashed" and looked "disgusting" as revellers moved on.

There were no toilets set up in the vicinity, he said.

People told the LBC reporter: "What the f*** are the police going to do?"

"All you can hear is music, the smash of glass bottles and the clink of empty laughing gas canisters hitting the floor," Peter Gillibrand said.

"Police vans are surrounding the crowds and paramedics have turned up.

"There have been several fights and all you can see is a party going on illegally outside the Senedd."

It comes after similar scenes were seen outside the same building earlier in the week when three police officers were injured and litter was dumped on the waterfront.

Cardiff council leader Huw Thomas said people who took part should be "deeply ashamed of themselves".

On Saturday morning, a Cardiff Council spokesperson said: "Once again our teams have been faced with the huge task of cleaning up a significant amount of rubbish left behind by large groups of people intent on breaking Covid-19 restrictions.

"Last night, bins were left unused and the ground was littered with rubbish. Council staff have been on site since the early hours of the morning, working hard to clear and clean the area.

Read more: PM says people cannot meet up indoors even if they are vaccinated

"Despite the preventative measures put in place by the council, in partnership with South Wales Police, the Welsh Government's coronavirus regulations were again broken by a significant number of people illegally gathering in Cardiff Bay.

"Breaking these rules significantly increases the chances of Covid-19 cases rising in the city. We urge everyone to follow the advice, maintain social distance, and to keep Cardiff safe."

South Wales Police Superintendent Marc Attwell said: “As restrictions have eased, the need for personal responsibility is critical and it is extremely disappointing that a small minority are willing to put themselves, and others, in harm's way.

“Cardiff Bay in particular has attracted large crowds over the past few days. The behaviour seen over the past three days has placed additional pressure on not only the police but the local authority as well, and meant that officers have been diverted from other parts of the force.

"The practicalities of policing such large gatherings is incredibly difficult and we do still have emergency calls to attend.

“A Section 35 dispersal order is now in place in Cardiff Bay, which gives Officers and PCSOs the power to exclude a person from the area.

"We are asking people in groups of six or more who are thinking of attending or organising a gathering down at the Senedd over this Bank Holiday weekend not to do so.

“Our officers will be out and about around Cardiff Bay throughout the Bank Holiday weekend. We’d urge people to be sensible and not to breach the rules – we don’t want anyone to be given a fine or be arrested for public order offences.

“As many restrictions are no longer in force, personal responsibility is critical if we are to prevent a third wave of infections. We all have a responsibility to make sensible choices when we are out and about, maintaining social distancing and not putting ourselves and others at unnecessary risk.” 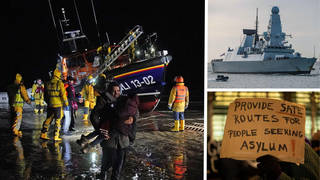