Clinicians have been forced to log people's jabs with pen and paper, it is understood, following an ongoing system outage affecting vaccine centres.

Immediately after the jab is administered, a clinician usually registers it digitally but the system is thought to have gone down across England at around 1.30pm.

People attending centres for a Covid-19 vaccine can still go ahead and should notice no difference to the service.

Likewise, it does not affect the online booking system, which continues to operate as normal.

Instead, the problem means clinicians will have to make a record that the jab was given and log it into the system manually later, once it is back up and running.

An NHS Digital spokesperson said: “We are aware of an issue and work is underway to resolve it.

"Vaccinations remain unaffected and will continue to be recorded.

"People should continue to turn up for their appointments as they usually would.”

NHS Digital confirmed that vaccinations from today have been, and are still, being recorded.

The news comes days after the vaccine system opened for all over 18s in England to book their jabs, which saw over 700,000 jabs booked on Friday.

Appointments were booked at a rate of more than 30,000 an hour - or eight every second.

The opening of the service to all over 18s is being described as the 'last push' to inoculate the entire country.

It comes amid fears of the highly transmissible Delta variant of Covid-19.

The strain, first identified in India, is now the dominant variant in the UK.

Public Health England said there was a 79 per cent rise in cases of the strain in just one week.

However, vaccines are thought to be highly effective against the variant, with analysis from Public Health England showing that two doses of the Pfizer jab were 96 per cent effective against hospitalisation from the Delta variant.

The vaccination programme in the UK has been hailed a success by many.

Over four fifths of adults in the UK have received at least one dose of the jab, and almost 60 per cent are fully vaccinated.

The Government is aiming for two thirds of the adult population to be fully vaccinated by 19 July, when restrictions are currently due to lift.

It is also aiming for every adult to have received at least one dose by then.

"By Monday 19 July we will aim to have double jabbed around two thirds of the adult population, including everyone over 50, all the vulnerable, all frontline health and care workers, and everyone over 40 who received their first dose by mid-May," said prime minister Boris Johnson at a press conference on 14 June.

"To do this we will now accelerate the second jabs for those over 40, just as we did for the vulnerable groups, so they get the maximum protection as fast as possible, and we will bring forward our target to give every adult in this country a first dose by the 19 July." 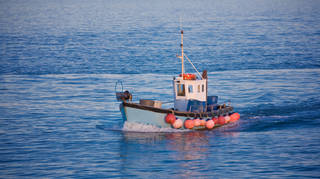