John Lewis is chartering extra ships to make sure its Christmas stock arrives on time.

A spokesperson for John Lewis confirmed to LBC that the company was chartering an extra fleet, alongside a number of other businesses, to ensure it has plenty of stock for its customers this Christmas.

Read more: Wetherspoons, IKEA and 100,000 pigs: Who has been affected by Brexit supply chain issues?

John Lewis is one of many retailers that has been wrestling with supply chain issues, down to a so-called "perfect storm" of Brexit and Covid.

From Wetherspoons to Greggs, numerous businesses have been hit by issues with stock, resulting in much-loved products not being available to customers.

Wetherspoons was recently hit by beer shortages, with some pubs in Tim Martin's chain not receiving deliveries of Carling and Coors.

M&S has had to resort to closing 11 of its stores in France, after saying that Brexit made it "near impossible" to supply fresh food to its customers.

The chief of the retail giant told LBC that lorries going to Dublin or France face a "fandango of bureaucracy" and have to take over 700 pages of documentation with them.- something that takes up to 24 hours to prepare.

"Quite simply that means that our fresh sandwiches or ready meals going to Ireland or France are delayed by about a day, and that's not good if you're a sandwich," he added.

Read more: McDonalds runs out of milkshakes amid disruption to supply chain

Other outlets that have reported supply chain issues include McDonalds, which recently tan out of milkshake and bottles drinks, and Nando's, which suffered a chicken shortage alongside KFC.

IKEA has also struggled, with 22 of its stores having problems with around 1,000 lines of products.

Staff shortages at various points along the supply chain, including lorry drivers, have been blamed for the issues. 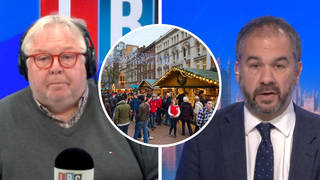