Health officials in Liverpool expect to see the number of Covid-19 patients in the city's hospitals surpass the levels of the first peak in the next seven to 10 days.

Councillor Paul Brant, cabinet member for adult health and social care at Liverpool City Council, said there were around 277 confirmed cases currently in hospital - compared to around 400 during the pandemic's first peak.

Around half of the intensive care beds across the Liverpool University Hospitals NHS Foundation Trust are currently occupied by those being treated for the virus.

"We're expecting to see rates of inpatients continue to rise and probably surpass the levels in March or April within the next seven to 10 days," Mr Brant said on Tuesday.

"There were 277 inpatients with Covid diagnosis yesterday, about 96 or so are awaiting tests. I think the previous peak was about 400 or so."

He added: "What will happen is they will stop the elective surgery, stop diagnostic procedures and stop screening services in order to free up beds that would otherwise be used for that activity, to ensure that any sort of surge capacity in relation to Covid is accommodated."

As there is not a temporary Nightingale hospital in the area, Mr Brant said wards in the half-built new Royal Liverpool Hospital were utilised as overfill capacity for patients during the first wave.

He said the trust was scaling back planned procedures, adding it was "taking a phased approach to reducing our elective programme, while exploring options with other providers to maintain some of this work in alternative locations".

He added: "We will continue to prioritise surgery based on clinical need, with a view to maintaining urgent and cancer surgery where possible.

"We will continue to maintain access to outpatient appointments wherever possible, and maintain diagnostic activity."

The news came as other hospitals around the country began to cancel routine operations to make way for a rise in Covid-19 patients.

Meanwhile, Victoria Eaton, Leeds director of public health, said hospitals in the city were "very close" to having to strip back non-Covid services, and areas may struggle for staff to fill Nightingale hospitals put on standby.

Swansea Bay University Health Board said on Tuesday that all routine planned cardiac surgery at Morriston Hospital has been temporarily suspended following a localised outbreak of the virus.

Some 10 patients and five staff have tested positive over the last few days - with most cases within cardiac services, it added.

In Northern Ireland, the Belfast Health Trust has cancelled all elective procedures this week to cope with a rise of Covid-19 cases being admitted to hospitals. 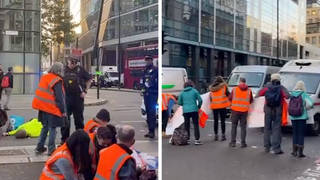