Police are hunting a man who verbally abused a gay couple for holding hands at Embankment.

The two men were holding hands when they were approached by a man who started shouting at them on Villiers Street.

The man continued to shout at the victims as they walked west along Jubilee footbridge towards Lambeth.

One of the victims was able to record the suspect on his mobile phone. The suspect is described as a slim white man in his early 30s wearing a black top, dark hooded jumper, jeans and trainers. 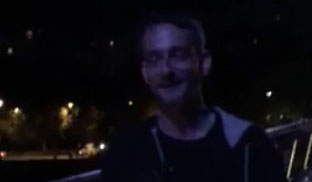 Police Constable Emma Rogers said: "This is a shocking incident that has left both victims very distressed. We are keen to identify the man in the footage so we can speak to them about the incident. We would also urge anyone who witnessed the incident to contact us."