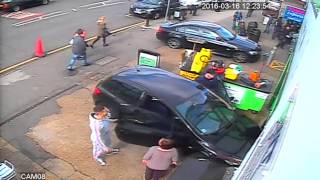 A woman with MS had her jaw broken in four places after a row with a man who parked in front of her business.

The footage, which was obtained by the Romford Recorder, shows two men pull up and park their car directly in front of a cleaning supply shop that 49-year-old Heather Smith runs with her business partner Keith Edwards.

The driver gets out of the car to visit the Tesco next door, which isn’t permitted. Heather and Keith tells the man this, but he waves them off and carries on. When he comes back he confronts Keith, knocking his glasses off.

Heather, who has Multiple Sclerosis, then tries to intervene, telling him the man to go, at which point he swings a punch at Heather, connecting with her jaw, breaking it in four places and knocking her to the floor.

Heather was taken to hospital where she underwent a three and a half hour operation and now has a metal plate and four pins in her jaw.

She told the Recorder of the pain and fear that the attack has caused her and that she had only left her house four times since it happened. Her business partner Keith has now put up a £1000 reward to try and find the thug from the video.