The police have released images of seven men they want to speak to in connection with violence at a West Ham and Middlesbrough game.

The game on Sunday, 1 October saw disturbances outside the ground and police want to identify the men in the images released. Four other men were previously arrested for affray and assault and have been bailed until November.

Superintendent Jonathan Williams, from the Metropolitan Police Public Order Command said: "The vast majority of football fans attending matches across London do so in the right spirit to enjoy the game and return home without incident.

"Sadly, there is a very small minority that occasionally engages in disorder and where that happens, we will do our utmost to identify those responsible and bring them to justice.

"I would ask anyone who recognises any of these men, or knows who was involved in the disorder following the West Ham vs Middlesbrough game to get in touch with us, as this kind of behaviour has absolutely no place at football matches."

If you have any information about this incident you can call the police on 020 7230 2425 or email SCO22-football@met.police.uk quoting the image reference. Alternatively you can call Crimestoppers anonymously on 0800 555 111. 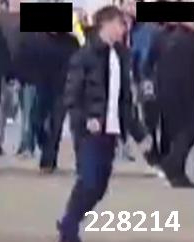