A violent fight broke out in the middle of a busy south-east London street between two men, one of whom used his belt as a weapon.

The video, uploaded by YouTube user Andre Coolahan, shows a stocky lorry driver repeatedly punch a motorist through the window of a car door.

The brawl then spills out on to the road as traffic comes to a near standstill as the pair tussle during the savage ruck.

At one point, the driver of the silver motor removes his belt and begins lashing the lorry driver with it.

The fight is temporarily stopped as one passing cyclist intervenes, trying to try calm the two angry men down.

It appears to work as the pair look to have settled their differences, however, the man wearing a green T-shirt takes one last swipe - before both men return to their vehicles.

The clip was uploaded to YouTube and has already been watched more than 300,000 times since Friday.

A Met Police spokesperson said: “Police were called on Friday, 30 June at 19:12 hours to reports of a disturbance in New Cross Road following a collision between a lorry and a car.

“Officers attended and no one was found to be injured. There was no trace of the vehicles or drivers.” 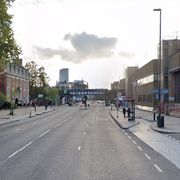 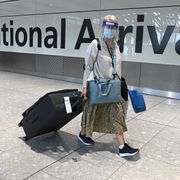