British Transport Police say they would like to speak to the man in the photo after a woman was inappropriately touched while she was waiting for a train at Norbiton rail station.

The incident took place at just after 6am on 30 September. The victim felt someone touching her from behind. She turned around and saw a man smiling at her.

He then left the station and she saw him return to the opposite platform, before boarding a train.

“We do not tolerate sexual assault of any kind and so are working to establish who the offender is and make sure he is brought to justice."

“Do you recognise the man in these images? We think he might have key information that could help us.” 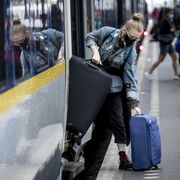