This is the moment a two people on mopeds sprayed what is thought to be acid in a man's face in a robbery next to department store Harrod's.

- Why moped crime is rocketing... and the police are powerless to stop it

The incident, which happened at Walton Place on Monday 31st July at 20:33, was caught on camera by a motorbike rider.

The 47-year-old had liquid sprayed into his face during the incident and required hospital treatment.

The video shows pedestrians and a taxi driver coming to his aid as the robbers made their escape on a moped.

The Met Police said: "Dressed in dark clothing and wearing helmets, they made off from the scene in the direction of Draycott Avenue, SW3.

"Enquiries are ongoing to establish the full circumstances of the incident. No arrests have been made.

"Any witnesses, anyone with any information or in possession of footage of the incident should contact police via 101, or via Twitter @MetCC." 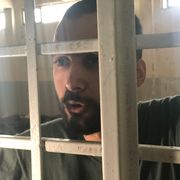 "I was a threat to nobody": British journalist's story of arrest and assault by US police

Coronavirus: Face masks 'absolutely a good idea' in shops but not compulsory