A man who wanted to give blood was turned away after refusing to indicate if he was pregnant.

Leslie Sinclair a retired driver for an engineering firm, has given 125 pints of blood over the last five decades.

Mr Sinclar, 66, tried to give blood at the Albert Halls clinic in Stirling, Scotland but was refused when he said he didn’t need to answer whether he was pregnant because he is male and in his 60s.

Staff said that he couldn’t give blood unless he gave a response, saying the policy was in place to ‘promote inclusiveness,’ according to the MailOnline.

Pregnant women or those with a baby younger than six months are not allowed to give blood.

He told MailOnline: “There are vulnerable people waiting for blood, including children, and in desperate need of help. But they've been denied my blood because of the obligation to answer a question that can't possibly be answered."

Professor Marc Turner, director of the Scottish National Blood Transfusion Service, said: "We appreciate the support of each and every one of our donor community and thank Mr Sinclair for his commitment over a long number of years. 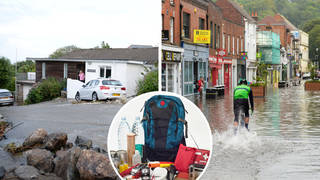 Omicron booster vaccine authorised for use in UK in world first

Three Britons among five people on trial in separatist-controlled Ukraine

US defence secretary tests positive for Covid-19 for second time

Kremlin critic Navalny says he is in solitary confinement