A man has been arrested on suspicion of causing death by dangerous driving after a nine-year-old boy was killed in a "hit-and-run" in West Yorkshire.

Emergency services - including the air ambulance - were called to the scene shortly after 9.30pm on Friday night, following a report of a collision in Keighley.

It was reported that a white van hit the boy, and another pedestrian who suffered minor injuries, before making off down the road, police said.

Despite medical treatment, the little boy was pronounced dead at the scene.

A 49-year-old man later went to a police station in North Yorkshire and was arrested on suspicion of causing death by dangerous driving. He remains in custody.

Read more: Police in CCTV hunt for attacker after woman is raped in London park

"A nine-year-old boy has tragically lost his life and our top priority is supporting his family and ensuring that a thorough investigation is carried out into the events that have led to his death," she said.

"This collision has happened right on the border of West Yorkshire and North Yorkshire and we are keen to speak to anyone who has witnessed this collision or who believes they may have seen the van involved immediately prior to or following this incident."

Anyone with information can contact police via 101 or 101 live chat on the West Yorkshire Police website, quoting crime reference 13210474457. 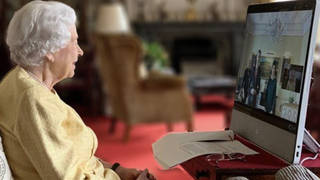 US announces details of Covid-19 travel requirements after November 8