Eurotunnel Le Shuttle has sparked confusion this morning after updating their travel advice to inform British residents that they can no longer travel through France to reach a third country.

The train operator, which runs vehicle carrying trains between Dover and Calais, gave the information on their website, describing it as an "urgent update for British residents in [the] EU."

The company said the decision was made by the French government yesterday - though no announcement appears to have been made by officials in Paris.

The website states: "Unless they hold French residency, British citizens are now considered 3rd country citizens and can no longer transit France by road to reach their country of residence in the EU."

Non-essential travel to France from the UK is already banned due to concerns over the Omicron variant of coronavirus.

Limited exemptions have applied, with the French Interior Ministry stating travellers from or to the UK must have a "compelling reason" and present a negative coronavirus test on departure.

French citizens and residents of France are also exempt, according to the guidance.

Eurotunnel Le Shuttle advises passengers to refer to the French Interior Ministry and French Embassy pages for advice, but no mention of any new restrictions appear on either page.

Read more: UK's vital PCR test capacity less than it was a year ago - as Omicron rapidly spreads

URGENT UPDATE FOR BRITISH RESIDENTS IN EU: Following a French Government decision, on 28/12/2021, unless they hold French residency, British citizens are now considered 3rd country citizens and can no longer transit France by road to reach their country of residence in the EU. pic.twitter.com/KGNr3FpWM2

The UK Foreign Office website also appears to have no updated restrictions listed, and a spokesperson told LBC the department is seeking clarification from the French government.

Anyone travelling to France must provide contact details of all travellers, including any address where they will be staying.

They must also complete an international travel form, stating their essential reason for travel, and a 'sworn statement' confirming they have no Covid symptoms.

The Foreign Office and French embassy have been contacted for comment. 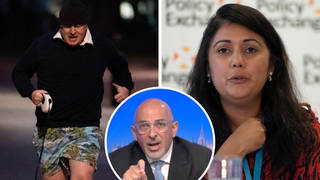