Holyrood might be in recess until next week but tomorrow will see the second virtual sitting during the festive break for MSPs as Nicola Sturgeon gives an update on Scotland's Covid situation.

It's unlikely that there will be more restrictions announced for two reasons: one, those currently in place have only been in operation since December 27 and have until January 17 to run before their efficacy will be judged and two, there is very little public appetite for more.

While the pleas not to mix - and to abandon work Christmas parties - were listened to, and the cancellation of Hogmanay meant large crowds in city centres didn't materialise, there is a growing discontent, certainly among those in the economic sectors most affected at the restrictions already in operation.

That unhappiness is also a reason why the Scottish Government has no desire to delay the return of school pupils to classrooms from Thursday - it doesn't want a rebellion by fed-up parents due to get back to work after festive holidays, even if teacher unions believe staff will be at increased risk of contracting Covid, given the easy transmissibility of the Omicron variant.

Already the Scottish Government has pointed to recent ONS statistics which showed one in 40 people in England with Covid compared to one in 25 in Scotland as proof that people heeded their advice prior to December 25. So it will want to wait for further movement in case numbers before any further action.

And that's an increase from 555 people in hospital on December 27. So while there may be no new restrictions announced tomorrow, there will be no early lifting of those already in place.

What is far more likely is an announcement on cutting the time people are expected to isolate for when they - or anyone in their household - tests positive.

Scotland alone is still asking people to isolate for ten days, while elsewhere in the UK it is seven. There may also be movement on whether a whole household has to isolate, if others are testing negative.

For the impact of this longer isolation - along with the rise in positive cases - is being felt on the frontline of the NHS and in care homes.

Covid-related absences among NHS staff are at their highest since March with the Royal College of Nursing saying the situation is of "real concern". Meanwhile the care home sector says it's facing a "critical situation" and Scotrail has implemented a reduced timetable to try and manage absences.

It's an issue which might yet face schools if teachers are similarly affected when schools return. Relieving that pressure will be high on the agenda.

Nicola Sturgeon may well also use tomorrow to answer the question so many are asking: of those with Covid in hospital, how many are there because they have the virus (and is it Omicron?), or are they there because of a separate health issue and it transpires they also have Covid?

There have been demands for more clarity in order to gauge just how much of the problem of full wards is down to coronavirus, and how much is down to the continued lack of care packages and care home places available to more elderly patients out of hospitals.

It may well be a new year, but the story of Covid is not getting old, and neither are the pressures on Nicola Sturgeon and her ministers to get the balance between public health and the country's economy just right. 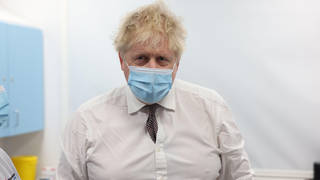 LIVE: Boris Johnson to face MPs as he fights for his job after car-crash interview

Top US diplomat in Ukraine as tensions with Russia soar