A convicted rapist who attacked "Britain's bravest cop" with a machete has been sentenced to 16 years in prison.

Muhammad Rodwan was given the sentence with three years on license for wounding with intent today by an Old Bailey judge.

The 56-year-old handyman was found guilty of wounding with intent, but cleared of attempted murder after attacking PC Stuart Outten with a machete in August last year.

Rodwan claimed he acted in self-defence, telling police: "My life is worth more than his life."

Jurors were not told of Rodwan's conviction for a previous attack on two men with a machete in east London in 1996, for which he was jailed for nine years for wounding with intent.

PC Outten was struck by the two-foot blade six times during a routine stop of a van suspected of having no insurance, the Old Bailey heard.

The brutal attack left the police officer with severe head injuries and needing months of surgery, but said he would return to the front line "hand in cast" if he had been allowed.

Just an hour before the incident, the constable texted his girlfriend, who is also an officer: "Right I'm off to cause trouble. Stay safe my love."

Following the attack, he texted her that it was "a bit more trouble" than he had bargained for.

In a recent interview, PC Outten said: “My taser saved my life. If front line officers want one, they should have one."

"I think I first realised what had happened when I was on all fours in the middle of Leighton High Road at just gone midnight,” said PC Outten.

"Before I know it I can feel something smacking against the side of my head and my head’s getting wet really quickly.

"I’ve got my finger on the taser button keep the electricity cycling and there’s blood literally looking like it was coming out of a tap in my head," he added.

"Then my first thought was, I might be in a bit of trouble, and I had to focus on my breathing to stop my heart rate escalating, blood escalating and losing consciousness.

"If I lost consciousness the taser could stop and he could get back up and carry on."

Detective Chief Superintendent Richard Tucker said he was "pleased a dangerous man is off the streets of London".

Paying tribute to PC Outten, he said: "He did what I would hope the vast majority of police officers in the country would do.

"He had the training, he put that into action, notwithstanding he was very, very lucky that day and I'm very, very proud of Stuart. He did an amazing job to apprehend that individual."

The commander for the Waltham Forest and Newham pointed to a rise in attacks on police officers in the capital, with 16 recorded every day, but said arming officers was "not necessary" to confront the problem.

According to Scotland Yard figures, 5,900 officers and staff were attacked between January and December last year, compared with 5,700 in the period between November 2018 and October 2019. 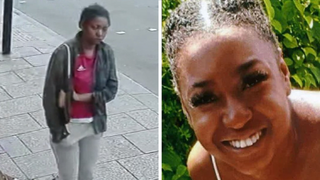