Valtteri Bottas outpaced Lewis Hamilton as Mercedes hit the front for the first time in the British GP weekend in the final practice session ahead of qualifying.

Mercedes had been quick, but not outstandingly so, on a roasting Friday as Racing Point set the Silverstone pace, but were significantly faster on Saturday morning amid cooler track conditions.

It was Bottas who gained an edge, outpacing team-mate and title leader Hamilton by a tenth of a second with a best lap of 1:25.873. What would have been Hamilton's best lap on soft tyres was distrupted by a big gust of wind which disrupted his W11 in the middle of the fast Becketts complex.

But Max Verstappen still enjoyed an encouraging morning for Red Bull. He finished third and just 0.3s back on the two W11s in a marked improvement to their single-lap pace at the last race in Hungary.

British GP Qualifying starts at 2pm live on Sky Sports F1 and Sky One, with build-up from 1pm.

Of Bottas' lap, Sky F1's Karun Chandhok said: "That was a very good lap from Valtteri. And he looks like he's able to repeat it.

"On Saturdays, that's not where Valtteri is losing the championship battle. He's right up there with the guy who is the most successful qualifier in the history of our sport."

Lance Stroll, Friday's pacesetter, was fourth for Racing Point but finished closer to the two McLarens and Ferrari's Charles Leclerc than the front three.

Carlos Sainz was the lead McLaren in fifth, with Lando Norris just over a tenth adrift in seventh, with the upgraded MCL35 working well around the fast sweeps of Silverstone. Renault too appear to have made a step forward with new parts, with Daniel Ricciardo eighth ahead of Nico Hulkenberg.

But it was another difficult morning for Red Bull's Alex Albon - this time for reasons outside of his control.

Keen to rebound on track from the crash that cost him time on Friday afternoon, Albon was only able to complete the final 15 minutes of P3 after an electrical problem struck his RB16.

Ferrari's Sebastian Vettel again encountered delays too and once more finished outside the top 10, this time in 14th place. 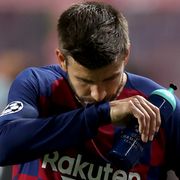 Cash vs Welborn: Shannon Courtenay's unbeaten record shattered as she is floored and defeated on points by Rachel Ball