Tesco has warned that frenzied shoppers could strip the shelves in the run-up to Christmas amid fears panic buying will be "far worse" than during the lockdown if the UK's lorry driver crisis is not addressed.

The supermarket giant is among a number of companies, including Amazon, M&S and McDonald's, who have complained of a shortfall of HGV drivers in recent weeks.

There is a loss of around 100,000 drivers across the UK, which has particularly impacted the food and drink supply chain, the Road Haulage Association said.

Tesco has warned the crisis could lead to a rise in panic-buying in the run-up to Christmas, which it said could be "far worse" than during the national lockdown when shelves were stripped bare of essentials such as toilet roll and flour.

The warning came in a meeting organised by the Cabinet Office last Thursday, ITV reported.

Andrew Woolfenden, Tesco's UK distribution and fulfilment director, called on the Government to temporarily make it easier to bring in workers from abroad to ease the issue.

Read more: Wetherspoons, IKEA and 100,000 pigs: Who has been affected by Brexit supply chain issues?

He said Tesco has only managed to attract as many drivers as it has lost to rival businesses over the summer despite offering £1,000 recruitment bonuses since July.

Mr Woolfenden said the problem was industry-wide and described attempts by companies to recruit from the same, limited pool of drivers as like "moving deckchairs around".

On the call, he added: "Our concern is that the pictures of empty shelves will get ten times worse by Christmas and then we'll get panic-buying."

Meanwhile, Katherine Mercer, Amazon's public policy manager for the UK and Ireland, told the meeting that recruitment efforts were "back at square one" and that Christmas will be "a real challenge".

He said a "perfect storm" of Covid, Brexit and a drop in HGV tests has caused major disruption in supply chains.

"It could come down to food or pressies - or essential products or presents - but not both," he said.

He proposed retraining people who have lost their job as lorry drivers and running HGV tests around the clock.

Hundreds of thousands of overseas workers, who left Britain during the pandemic, stayed abroad while others left in the wake of stricter immigration rules following Brexit.

M&S chief executive Archie Norman condemned the post-Brexit "fandango of bureaucracy", just days before the retailer announced it will close 11 of its French stores.

Mr Norman told LBC that the difficulty Brexit poses for Marks and Spencer is that they have a big presence in the Republic of Ireland and France, which are both in the EU.

"What we've discovered is that the European rules for governing borders at the customs union are really totally out of date and not suited for the purpose they're designed for.

"What we've got is a fandango of bureaucracy."

He told LBC that lorries going to Dublin or France have to carry approximately 720 pages of documentation which takes up to 24 hours to prepare.

"Quite simply that means that our fresh sandwiches or ready meals going to Ireland or France are delayed by about a day, and that's not good if you're a sandwich."

A Tesco spokesperson reassured customers they have deliveries arriving every day.

"We have good availability, with deliveries arriving at our stores and distribution centres across the UK every day," the spokesman said.

"While the industry-wide shortage of HGV drivers has led to some distribution challenges, we're working hard to address these and to plan for the months ahead, so that customers can get everything they need."

A spokesperson for Amazon said: "The festive season is always our busiest time of the year and, as we do every year, we'll be working to provide the best possible service for our customers."

The Government has confirmed that up to 50,000 more HGV driving tests will be made available each year to streamline the testing process and tackle the worldwide lorry driver shortage.

A Government spokesperson said: "We recognise business is facing a range of challenges and we are taking steps to support them, including streamlining the process for new HGV drivers and increasing the number of driving tests.

"Progress is already being made in testing and hiring, with improving pay, working conditions and diversity.

"We are closely monitoring labour supply and working with sector leaders to understand how we can best ease particular pinch points." 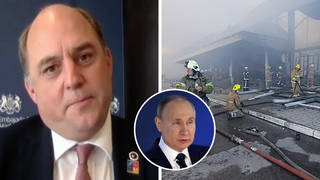