The Wanted's Tom Parker has revealed he was recently diagnosed with an inoperable brain tumour and is fighting to prolong his life.

The singer said he is fighting a tumor on his brain with various therapies so he can be with his newborn daughter as long as possible.

The 35-year-old, who has a 15-year-old daughter and another child on the way, revealed the devastating news in an interview with OK! Magazine on Monday.

He said the disease was "all he can think about" and explained that he will undergo rounds of radiotherapy and chemotherapy to fight stage four glioblastoma.

Tom described how doctors discovered the tumor after getting an MRI scan following a summer of strange experiences, including what he thought were minor seizures and back pain.

"They pulled the curtain around my bed and said, 'It’s a brain tumour,' he said.

"It’s stage four glioblastoma and they’ve said its terminal. It was a lot to deal with by myself. I still haven’t processed it."

In an Instagram post, the couple explained why they had been so quiet on social media recently, but said they had "decided, after a lot of thought, that rather than hiding away and trying to keep it a secret, we would do one interview where we could lay out all the details" to let fans know about his diagnosis.

Hey guys, you know that we’ve both been quiet on social media for a few weeks and it’s time to tell you why. There’s no easy way to say this but I’ve sadly been diagnosed with a Brain Tumour and I’m already undergoing treatment. We decided, after a lot of thought, that rather than hiding away and trying to keep it a secret, we would do one interview where we could lay out all the details and let everyone know the facts in our own way. We are all absolutely devastated but we are gonna fight this all the way. We don’t want your sadness, we just want love and positivity and together we will raise awareness of this terrible disease and look for all available treatment options. It’s gonna be a tough battle but with everyone’s love and support we are going to beat this. Tom and Kelsey xxx

His partner Kelsey said it "still doesn't feel real" and that she struggles to watch Tom go through the heartbreaking experience.

"I don’t think Tom will ever process this information. It’s horrendous. Watching your partner go through this is so hard, because how can I tell him to not let it consume him?

"I take his phone away from him, because otherwise he will sit there and Google things and then end up in a hole. The more you Google, the worse possible stuff it throws at you, and that’s not good for anyone."

The couple confirmed there were signs that something was not right during the summer, when Tom believed he had a minor seizure in July and on holiday during August, was complaining of back pain and later found a strange mark on his head.

Asked about how the couple will explain the upsetting news to their kids, they said that 15-month Aurelia was able to "pick up on moods" well and knew something was not right.

"She knows something is happening and that’s why I think you just have to be as normal as possible," Kelsey told the magazine. 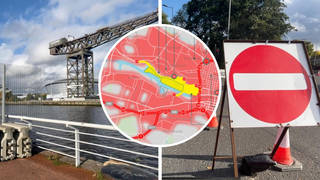