Sir Tony Blair: Over 300,000 people call for former PM to be stripped of knighthood

A petition to have Sir Tony Blair stripped of his knighthood has been signed by more than 300,000 people - just a day after the news broke of the award.

Sir Tony, who left Downing Street more than 14 years ago, was one of three new appointments announced by the palace alongside Baroness Valerie Amos and the Duchess of Cornwall.

He was appointed as a Knight Companion of the Most Noble Order of the Garter, the oldest and most senior British Order of Chivalry, with the honour from the Queen regularly bestowed upon past prime ministers including most recently Sir John Major.

The decision to give the former Labour prime minister the highest ranking of knighthood is already dividing opinion, with some questioning whether his role in the UK's war with Iraq should disqualify him.

In a new petition, signed by over 300,000 people at the time of publishing, Sir Tony was described as the "least deserving person of any public honour".

The petition claims Sir Tony "caused irreparable damage to both the constitution of the United Kingdom and to the very fabric of the nation's society".

It continued: "He was personally responsible for causing the death of countless innocent, civilian lives and servicemen in various conflicts."

Peter Geoghegan, editor of Open Democracy, said the reaction to the announcement has been fairly predictable.

He told LBC: "It's not surprising that it's got people going if you think about the context in which this has happened. There's something kind of oddly fitting about Desmund Tutu's funeral, you know, Desmund Tutu was someone who said both Tony Blair and George Bush should be tried at the hague for war crimes in connection with Iraq."

He added that the whole New Year Honours system is "problematic" as it "operates as a self-serving patronage system".

However, some have defended Sir Tony's knighthood, with his former adviser John McTernan insisting it is an "absolutely brilliant recognition" of the former Prime Minister's achievements.

He told LBC: "It is a recognition from her [The Queen] of the service he did for the country by achieving peace in Northern Ireland, a conflict that lasted for over 100 years."

Appointments to the Garter are in the Queen's gift and made without prime ministerial advice, and are usually announced on St George's Day, April 23, but the monarch can do so at any time, and chose this year to coincide with the New Year's Honours.

They are for life unless a Knight or Lady Companion offends against certain "points of reproach".

Founded in 1348 by Edward III, the Garter is awarded by the sovereign for outstanding public service and achievement.

It is said to have been inspired by events at a ball in northern France, attended by the king and Joan, Countess of Salisbury.

The countess is believed to have dropped her garter, causing laughter and some embarrassment.

The chivalrous king, however, picked it up and wore it on his own leg, uttering the phrase "Honi soit qui mal y pense" - "Shame on him who thinks this evil" - now the Order's motto.

The Order's emblem is a blue ribbon or garter worn by men below the left knee and by women on the left arm.

There are now 21 non-royal companions in the order out of a maximum of 24. 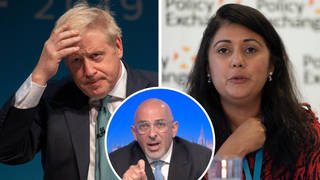