The Tories have said immigration would "surge" under a Corbyn-led government with Labour branding it "fake news" from the "make-believe research department."

With the date for the General Election fast approaching the Conservative Party has warned migration would increase under a Labour government which would "put public services under increasing pressure."

The Tories said analysis of new research into Labour's proposals for open borders suggests net migration "could increase to 840,000 per year if Mr Corbyn is elected as Prime Minister".

According to the party, the research shows Labour's plans maintain free movement for EEA member would result in average net immigration to the UK of 260,000 over the next 10 years or the "equivalent to a city the size of Brighton moving to the UK every year."

The party said if free movement was extended to the rest of the world it would be like " combined populations of Manchester and Newcastle moving to the UK every single year," with 840,000 extra people a year over the next 10 years.

The Tories said this is in "stark contrast" to their proposed "skills based immigration system."

A Conservative spokesperson said: "We would be in control of our borders and decide who comes to our country based on what they have to offer, not where they come from. Freedom of movement would end in January 2021 and EU and non-EU citizens will be treated equally."

Home Secretary, Priti Patel, said: “Under Corbyn's Labour, immigration would surge, and put huge strain on schools and our NHS. Jeremy Corbyn has no credible plan for how to deal with the consequences of his open borders policy. The biggest risk to our NHS is Corbyn's plans for uncontrolled and unlimited immigration, forever.  His plan to hold another two referendums next year - and all the chaos that will bring - will mean that his Government will not have time to focus on the people's priorities.

“By contrast the Conservatives will get Brexit done, end free movement and introduce an Australian-style points system so that we can control our borders and protect our public services.

“We will reduce immigration overall while being more open and flexible to the highly skilled people we need, such as scientists and doctors. This can only happen if people vote for a Conservative majority government so we can leave the EU with a deal.”

Labour's Diane Abbot hit back at the Tory claims branding them "fake news," she said: “This is more fake news from the Conservative Party's make-believe research department.

“Unlike the Tories we won't scapegoat migrants or deport our own Windrush generation citizens. The damage done to our society has been through damaging Conservative cuts to our public services, not by EU nationals coming to work in them.” 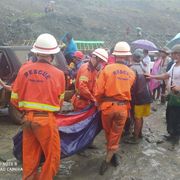 Myanmar landslide kills 100 at jade mine after people left trapped