The Conservative deputy chief whip has resigned, saying he "drank far too much" after groping allegations were made against him.

Christopher Pincher sent a letter of resignation to Prime Minister Boris Johnson in which he admitted he had "embarrassed myself and other people" by drinking "far too much".

Reports said allegations were made to the chief whip Chris Heaton-Harris that Mr Pincher groped two men at a Piccadilly members club on Wednesday night.

The Times reported Mr Heaton-Harris spoke to the alleged victims and then Mr Pincher himself.

The MP resigned his post as deputy chief whip, writing to the Prime Minister: "Last night I drank far too much.

"I've embarrassed myself and other people which is the last thing I want to do and for that I apologise to you and to those concerned.

"I think the right think to do in the circumstances is for me to resign as Deputy Chief Whip.

"I owe it to you and the people I've caused upset to, to do this.

"I want to assure you that you will continue to have my full support from the back benches, and I wish you all the best as you deal with the aftershocks of COVID and the challenges of international inflation.

"It has been the honour of my life to have served in Her Majesty's Government."

The Sun said Mr Pincher would continue to sit as a Tory MP as he was considered to have done the right thing by admitting wrongdoing and resigning, however Boris Johnson is facing calls to expel him from the party.

"This latest episode shows how far standards in public life have been degraded on Boris Johnson's watch," she said in a statement.

"Boris Johnson has serious questions to answer about why Chris Pincher was given this role in the first place and how he can remain a Conservative MP," she said in a statement.

"The Conservative Party is so mired in sleaze and scandal that it is totally unable to tackle the challenges facing the British people.

"The Conservative MPs who continue to prop up this Prime Minister's paralysed administration need to grow a backbone and tell him the party's over."

Mr Pincher has been the MP for Tamworth, Staffordshire, for 10 years.

He served as a minister under Theresa May.

The Sun reports his resignation is over his behaviour at the Carlton Club, a Tory Party private members club in London.

He will be permitted to stay on as a Tory MP because he admitted he was wrong and resigned as a result, the paper reports.

The Carlton Club is just a short walk from Westminster.

The whips are responsible for enforcing discipline in the Tory party.

Mr Pincher is the latest in a line of Tory MPs to become embroiled in a sex allegation scandal.

Last month Imran Ahmad Khan was jailed for 18 months after being found guilty of sexually assaulting a teenage boy.

LBC has approached CCHQ and Mr Pincher's office for comment. 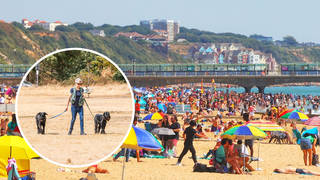