Chancellor Rishi Sunak is being urged to take more action to ease the cost of living crisis, as the Office for Budget Responsibility (OBR) predicted living standards in the UK are set to plummet to record lows.

Mr Sunak delivered his Spring Statement on Wednesday, designed to alleviate the deepening cost of living crisis in the UK.

But the measures - including a cut to fuel duty and a rise in the National Insurance threshold - will do little to tackle a fall in living standards as a result of the crisis, according to the OBR.

A number of senior Tory MPs have since urged Mr Sunak to do more.

Read more: 'What more can I do?': Mum with 3 jobs and no heating calls LBC to beg Sunak for help

Read more: Concert for Ukraine: Chancellor announces VAT on tickets to be donated to charity

Sir John Redwood, a former minister under Margaret Tatcher, said: "The Treasury found £105bn it was not expecting over the course of the year.

"They should have given more of this back to taxpayers to tackle the cost of living crisis."

And former Conservative Party leader Sir Iain Duncan Smith said the Chancellor should have "gone further to ease the burden on working families".

The UK is set to experience the biggest fall in living standards since records began in the 1950s, with Mr Sunak's plans set to only tackle a third of the overall fall.

The OBR outlined a short-term outlook where "real household disposable incomes per person fall by 2.2 per cent in 2022-23", representing "the biggest fall in living standards in any single financial year since records began in 1956-57".

"Petrol prices are already up a fifth since our October forecast and household energy bills are set to jump by 54 per cent in April," said the OBR.

"If wholesale energy prices remain as high as markets expect, energy bills are set to rise around another 40 per cent in October, pushing inflation to a 40-year high of 8.7 per cent in the fourth quarter of 2022."

The OBR added: "Taking account of both energy and non-energy pressures on household incomes, the policy measures announced since October offset a third of the overall fall in living standards that would otherwise have occurred in the coming 12 months."

Mr Sunak announced a number of measures in his Spring Statement on Wednesday.

He offered support to motorists facing soaring petrol prices by cutting fuel duty by 5p per litre for the next year, a move that came into force at 6pm on Wednesday and will last until March 2023.

The National Insurance threshold was also increased by £3,000 to £12,570, something Mr Sunak said would amount to a tax cut for employees "worth over £330 a year".

The Chancellor offered help with household bills too, announcing an extra £500 million for the support fund - doubling its total amount - to help vulnerable families with short-term crisis funding from local authorities.

He also announced he would scrap VAT on energy-saving materials such as solar panels and heat pumps.

The measures are designed to tackle the escalating cost of living crisis in the UK.

The soaring costs households face are led by rising gas prices, the result of surging demand and the conflict in Ukraine.

But the cost of living crisis is also buoyed by inflation - which reached a 30-year-high in February - and surging petrol prices.

The measures in the Chancellor's statement are largely thought to be insufficient in tackling the crisis.

For example, a cut in petrol prices of 5p per litre scraps only a third of the increase in price seen in the last month alone.

According to the Institute for Fiscal Studies (IFS) think-tank, bringing together the expected changes in earnings, the reforms to taxes, and the energy measures announced in February, a middle earner on £27,500 per year can expect to be about £360 worse off this year than they were last.

There have been calls for stronger action to support pensioners, people with disabilities and low income households.

Some argue the measures do not go far enough to support struggling pensioners, who are dealing with inflation at a 30-year high of 6.2 per cent ahead of a 3.1 per cent state pension increase in April.

The pensions triple lock - a guarantee that pensions are uprated in line with earnings, inflation, or 2.5 per cent, has been temporarily shelved for a year.

Jon Greer, head of retirement policy at Quilter, said: "Most (pensioners) probably won't have already been planning to install solar panels and heat pumps and many older people either don't drive or only take short journeys, meaning the cut on fuel duty is unlikely to offer a helping hand."

Read more: Cost of living crisis: Inflation rises by 6.2% and its highest level in 30 years

Food banks and charities have been reporting surges in cries for help.

Gareth McNab, director of external affairs at Christians Against Poverty, said Mr Sunak has left "a glaring hole in terms of an opportunity to provide a longer-term fix to make sure the social security system is linked to the real costs people face".

Many people living with disabilities and illnesses such as cancer often face higher energy bills.

He said: "Many disabled people are facing real terms cut to their benefits, just as prices ratchet up and energy bills soar... the expansion of the household support fund will provide some relief, but like the rise in national insurance thresholds and a cut to fuel duty it's not targeted at disabled people."

IFS director Paul Johnson said: "Perhaps what really stands out today is what was missing. In the face of what the OBR calls the biggest hit to household finances since comparable records began in 1956-57 (the Chancellor) has done nothing more for those dependent on benefits, the very poorest, besides a small amount of extra cash for local authorities to dispense at their discretion.

"Their benefits will rise by just 3.1 per cent for the coming financial year. Their cost of living could well rise by 10 per cent." 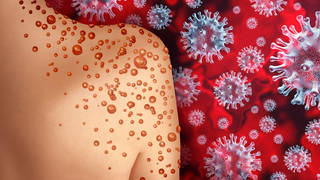 £60k raised for boy, 11, who had finger amputated after injuring it 'running from bullies'

Putin has had cancer, says Oliver Stone who spent 2 years shadowing him

Monkeypox outbreak: What is the virus and how does it spread?

The Kardashians take to Portofino for Kourtney-Travis wedding

Youngest of 10 Buffalo shooting victims is laid to rest