The mini-heatwave is set to continue in the UK today, with forecasters predicting temperatures could near the hottest ever recorded in March, potentially surpassing the 25.6C recorded in 1968.

Brits flocked to beaches and parks on Tuesday, as warm weather coincided with the easing of rules on socialising outside.

Health Secretary Matt Hancock said that while people enjoy the sun, they need to be careful not to "blow it" at this stage of the coronavirus pandemic.

The figure is the hottest ever March temperature since the all-time record of 25.6C (78F) was set in 1968, at Mepal in Cambridgeshire.

Read more: Final day of shielding for for almost 4 million people in England and Wales

Read more: Half of UK population now has Covid-19 antibodies

However, forecasters predict temperatures on Wednesday will be even warmer than the previous day, with the Met Office suggesting the mercury will "get close to this all time March record" and that it is a "possibility" the record could be broken.

Today has been the warmest March day since 29th March 1968 when 25.6°C was recorded in Mepal, Cambridgeshire

Temperatures could get close to this all time March record tomorrow https://t.co/oMwCJdswJp pic.twitter.com/41AzaASJaH

Met Office forecaster Alex Burkill said the temperatures are "exceptionally high for the time of year", adding he expects Wednesday to be a "touch" warmer than Tuesday.

However, England and Wales are expected to see another day of warm dry weather on Wednesday, it will be cloudier with potential rain across Scotland and Northern Ireland.

Read more: Protestors gather in Bristol for another Kill the Bill demonstration

Plenty of #warm #spring #sunshine for England and Wales on Wednesday ☀️

But while many were seen enjoying the weather on Tuesday, Matt Hancock has urged people to do so safely, after a number of incidents of crowds gathering.

The Health Secretary tweeted: "Let's enjoy the sun but let's do it safely. We have come so far, don't blow it now."

Let’s enjoy the sun but let’s do it safely. We have come so far, don’t blow it now.

Pictures taken on Tuesday afternoon show police officers seizing alcohol from people sitting in the sunshine, while council officers have been checking bags at park entrances.

Read more: Crowd of students defies rule of six in Nottingham park before ‘brawl’ breaks out

Meanwhile, armed officers descended on Woodhouse Moor in Hyde Park, Leeds, at around 8pm, after reports of someone with a knife. There were no reports of injuries or arrests.

A police helicopter was also called in later in the evening, with videos posted online showing the park strewn with rubbish on Wednesday morning.

Police attended similar reports at a packed Primrose Hill in north London, with videos posted on social media appearing to show a man charing into crowds brandishing what appears to be a knife.

The Metropolitan Police said they conducted a search of the area but found no trace of the man. 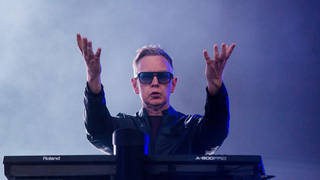