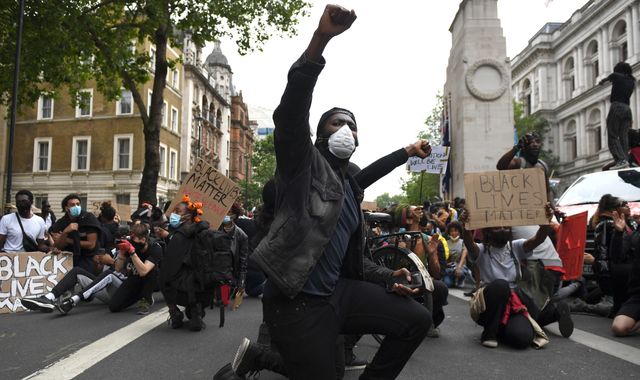 For many black people in Britain, George Floyd's killing is seen as something that could have happened to them or their own father, son, uncle or brother.

The death of the 46-year-old during an arrest 10 days ago in Minneapolis, Minnesota, has sparked protests across the world. It has created a huge conversation around racism and the ways black people are often treated by the police.

The words of George Floyd, gasping "I can't breathe" as a white police officer knelt on his neck for several minutes was chanted across the streets of central London on Wednesday.

The deaths of black Britons in police custody is hardly a new development in the UK, but the nation's reaction to Mr Floyd's death has resurrected long held tensions, particularly with regard to contact with the police.

Since 2010, 13 black people have died in police custody in England and Wales, according to the Independent Office for Police Conduct.

"I am protesting in support of all the black and minority lives which seem to have not mattered. We have suffered for too long. I'm here slashed and stained and making a statement with my outfit to represent everyone who has fallen at the hands of the police in the UK and America," says Alexandru Sones-Dawkins.

The 21-year-old from south London describes the tragic death of Mr Floyd as "appalling" and called for young people of all races to take a stand.

He says the events in the US have captured national attention in the UK because they are indicative of the racial inequalities many black people have to confront every day.

There are many differences when it comes to how people of colour are treated in British society, he says.

The influence of the Black Lives Matter movement gives a voice to ethnic minorities.

"We need change now. We can't wait any longer. People are ready to do whatever it takes."

In the UK, black people are disproportionately targeted by police stop and search powers and for Syrus Gridnon, 26, it is something he had to live with throughout his teens.

"I was bought up in a white community, so personally for me I didn't really notice racism being a young kid, but as I grew up I started to notice certain things happening to me.

"I have friends and family who have been abused by the system. I have lost count of the amount of times I have been stopped by the police."

For Gridnon, the impression is that little has changed since his parent's generation.

"George Floyd's murder is nothing we haven't previously seen. I just worry how many more people will die before things change," says Queen Allen.

The mum-of-one from West London insists there is no shortage of stories about police using excessive force against black people who are often unarmed. Black mothers like her often worry about their teenage children.

"I'm a mum and these kind of things worry me. It just keeps happening continuously. Every few years another black person dies at the hands of white police.

"This is why when George Floyd died in America we all realised over here that we had the same issues."

The anger that's spreading across the UK, according to Allen, is an indication we have reached breaking point.

"We have had enough. There's a list of black people, men and woman, who have died in custody in this country and although it may not happen as often as it does in America, it is happening over here."

Stephen Lawrence was stabbed to death by a gang of white youths in 1993. Six years later Sir William Macpherson's public inquiry into his murder labelled the police investigation as "institutionally racist".

For Taryn Harris, not much has changed in the last 21 years.

"We still have to work twice as hard just because of our skin colour. George Floyd is the tip of the iceberg which really activated everyone. Over here there was the London riots in 2011, but the video of George getting killed has now triggered something in everyone to come out and protest for their rights."

"Enough is enough. All we are asking for is not to kill us. We are not asking for much," says Reggie Mlongoti,

"I have always had a problem of feeling like I should oppress or limit my blackness. It's like my blackness scares people. I know it's in my head but I get shown so many examples."

For Christy Duvenhage, white privilege played a crucial factor in this incident, but it is too often obscured, she says.

"I am fully aware of my white privilege. It is feeling protected rather than being afraid of the police.

"I come from Zimbabwe and although I am not black and I won't experience racist comments, I feel guilty that I have not done anything vocally to help the people who have been oppressed for so long. Because we are not racist it makes me emotional that we almost can't do more," she added.

But for Emily Muttitt we have been here before. The thing that is different this time round is this is an interracial movement.

"My mum and uncle were the only mixed-race kids in their school and people used to cross the street because they didn't want to walk on the same side as them.

"So with what's happened, you just feel that connection that you have got to stand up and fight. This has been going on for too long. We are all in this battle together," she said.