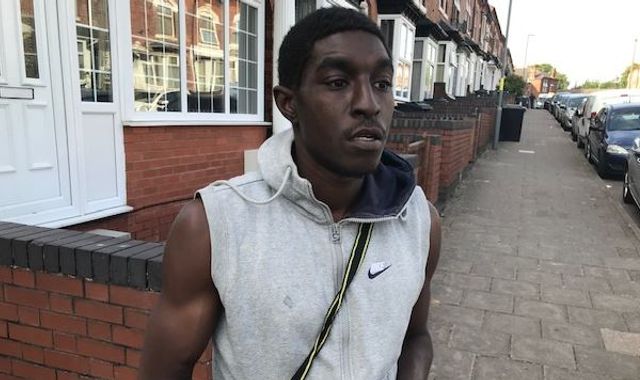 A man who was tasered in the throat in Birmingham says he believes he was targeted by police because he is black.

The incident is one of six cases being investigated by the Independent Office for Police Conduct (IOPC) into alleged excessive use of force on black men and a teenager in the last four months.

Trevaile Wyse, 30, said he had just arrived home from work in February when there was a car crash in the street outside his house. He went out to see what had happened and found himself targeted by police officers.

"The police officer had chased some lads off down the road and he turned around with his Taser drawn and ran back up the road and told me to get on the ground.

"And then he just fired the Taser which hit me in the throat."

He believes there's only one reason he was targeted.

"By that specific officer I personally believe it was because I was black. There could have been no other reason for it. He was fixated on me.

"There were other people around, you know, standing next to me. He didn't order them to get on the ground. I believe it's because I was black."

The incident was captured on a mobile phone. Footage of a separate incident involving West Midlands Police officers shows a black man being slammed into the bonnet of a police car and punched three times.

The IOPC are also looking at a stop-and-search of a 15-year-old, where the boy was kicked and hit and an incident where a man's ankle was fractured.

The chief constable of West Midlands Police, Dave Thompson, has said the independent investigation into six cases should give the community confidence, but writing on a blog following the death of George Floyd in the US, he said: "I think this has added to tensions we are now policing here.

"Young black people across the West Midlands will rightly feel strongly about these events and the fact they are in the US makes no difference.

"They affect how policing is seen on our streets."

Assistant chief constable Matt Ward told Sky News he is concerned that he has colleagues in the force who treat black people differently when they are arresting.

"If there are those colleagues I want them out of this organisation," he said.

People in Birmingham held a demonstration to show their anger over the death of George Floyd, the 46-year-old who died after being restrained by police in Minneapolis.

Desmond Jaddoo, a community leader in the city, said there is a danger trust in police here has been damaged too.

"Policing is a relationship between the police, in terms of policing by consent and the community," he said.

The IOPC confirmed that four of the six incidents being investigated in Birmingham involve one officer who has been suspended by West Midlands Police.

Two of the investigations under way are scrutinising the actions of officers who were in supervisory roles when those incidents took place.

The West Midlands regional director for the IOPC Derrick Campbell said: "I would like to reassure communities in the West Midlands that full, fair and thorough independent investigations are under way into all of these incidents and the conduct matters brought to our attention by the force."

(c) Sky News 2020: Birmingham man tasered by police says he was targeted because he is black