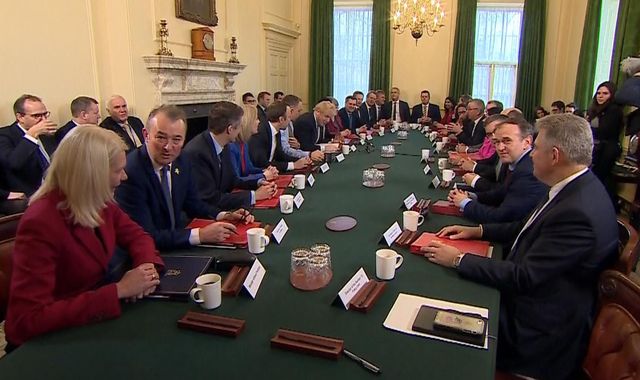 Boris Johnson is chairing the first meeting of his new cabinet - a day after a dramatic reshuffle saw Sajid Javid shock Westminster by resigning as chancellor.

Mr Javid said he was left with "no option" but to quit after the prime minister ordered him to fire his closest aides and replace them with advisers chosen by Number 10.

The former chancellor said this was a condition "any self-respecting minister" would reject, prompting him to walk.

Rishi Sunak, his former deputy at the Treasury, has been appointed as his replacement.

Mr Javid, who becomes the shortest-serving chancellor in 50 years, made a number of pointed references to the row in his resignation letter to the PM.

The former chancellor said it was "crucial for the effectiveness of government that you have people around you who can give you clear and candid advice".

And he told Mr Johnson: "I would urge you to ensure the Treasury as an institution retains as much credibility as possible."

Mr Javid's departure - which came after weeks of reported tensions between him and the PM's chief adviser Dominic Cummings - throws the date of the next budget on 11 March into doubt.

Downing Street has refused to guarantee that it will go ahead as scheduled, with a spokesman saying only that "extensive preparations have already been carried out for the budget and they will continue at pace".

Mr Sunak, whose promotion marks a rapid rise for someone who became an MP in 2015, said his "predecessor and good friend Saj" did a "fantastic job" as chancellor.

"He was a pleasure to work with and I hope to be able to build on his great work going forward," he added.

In the hours after Mr Javid's resignation, Downing Street confirmed that a new joint team of special advisers was being established in Number 10 and Number 11 to advise the PM and his new chancellor.

Mr Javid was among a number of casualties in Mr Johnson's first major reshuffle since he entered Downing Street in July:

The PM has gathered his new top team in Downing Street this morning and is finishing off the remaining appointments to the more junior rungs of the ministerial ladder.

Communities Secretary Robert Jenrick defended the ultimatum put to Mr Javid, talking up the decision to "have an economic team that was as united as possible".

He told Sky News "we all regret" the former chancellor's decision to quit, adding: "I'm sorry to see him leave."

There seemed to be no bad blood with Mr Smith, who insisted "I don't think that was a surprise" he was sacked.

"The PM's going to be a great success," he said, adding: "I think my future plans are things like going to the pub."

Meanwhile Mr Cummings did not say anything to reporters on his way into work on Friday, but chuckled when asked if he was the Thomas Cromwell of British politics.

The number of women attending cabinet has fallen after the reshuffle, from eight to seven.

There are also fewer women in the most senior roles.