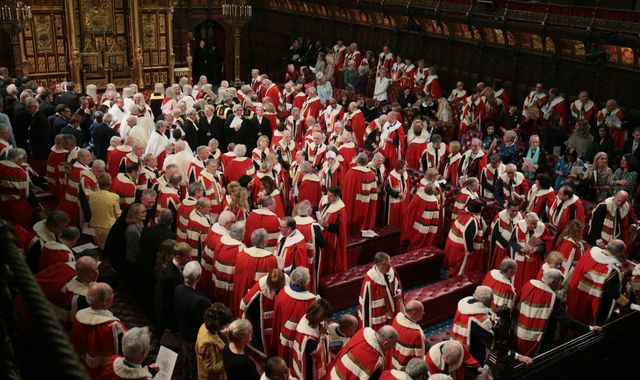 Boris Johnson has suffered further defeats in the House of Lords, as peers backed two more amendments to the prime minister's Brexit legislation.

In the first of the reverses in the upper chamber, the Lords voted in favour of an amendment to the Withdrawal Agreement Bill (WAB) known as the Dubs amendment.

Put forward by Lord Dubs, it calls for the restoration of the right of unaccompanied child refugees to be reunited with their families in the UK post-Brexit.

The Labour peer fled the Nazis as a child on the Kindertransport.

He has called on the government not to use the small number of children involved as "bargaining chips" in talks with the EU.

Lord Dubs has accused ministers of seeking to remove earlier protections for child refugees in the EU (Withdrawal) Act 2018 - and said it was a matter of humanity to keep them in place.

Calling on Number 10 not to "close the door" on those affected, he said some of the children lived in "shocking conditions" in French camps and were at risk of sexual exploitation.

Lord Dubs told peers that by approving the amendment - and in turn giving the children a safe, legal route to the UK - they would be "thwarting the traffickers" and removing the need for them to seek out more dangerous options to get to their families.

Home Office minister Baroness Williams said the Conservatives' track record during their decade in office showed a commitment to protecting vulnerable children and this would continue.

She told peers that more than 41,000 children had been granted protection in the UK since 2010 and over 5,000 unaccompanied children were being cared for in England alone.

Lady Williams added that the Tory election manifesto underlined the commitment to continue to grant asylum and support for refugees fleeing persecution.

And a government spokesperson said: "Our policy on unaccompanied asylum-seeking children has not changed.

"Protecting vulnerable children will remain our priority after Brexit and the Withdrawal Agreement Bill reaffirms our commitment while clarifying the role of parliament and government in negotiations."

Later on Monday, the Lords backed calls to give reassurance to Scotland and Wales on devolution powers.

They supported by 239 votes to 235, majority four, a demand to write into EU divorce legislation the so-called Sewel Convention.

This states that the UK parliament "will not normally" legislate for devolved matters without the consent of the legislature affected.

Brexit minister Lord Callanan said the amendment was an "unnecessary restatement" of the Sewel principles, which were already enshrined in statute.

The WAB will go back to the Commons on Wednesday.

Mr Johnson is expected to use his large majority in the lower chamber to overturn the Lords defeats.

The government suffered three reverses in the unelected upper chamber on Monday.

The first was on on the issue of documentation for EU citizens living in Britain, with peers calling for those lawfully residing here to be allowed physical proof of their status.

They then voted in favour of removing ministerial powers over the courts departing from European Court of Justice judgments.

The third defeat saw the Lords back a move to allow cases to be referred to the Supreme Court to decide whether to depart from EU case law.