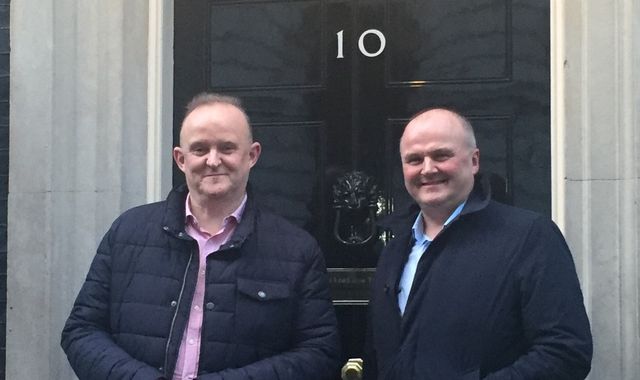 Two brothers on different sides of the Brexit debate have shown feelings remain strong on the issue with just three months until the key changes come into effect.

Ian Baxter voted to remain in the EU in the 2016 referendum, while his brother, Nigel Baxter, voted to leave.

But Ian, chair of Baxter Freight, thinks the UK is already economically worse off and is now "far more desperate" to secure a trade agreement with other countries than they are with Britain.

As the Brexit transition period comes to an end in just over three months, the pair discussed how they feel about the country's withdrawal from the bloc on the Sky News Daily podcast.

They have spent the past six years exchanging their contrasting views and remain strongly aligned to how they voted.

"Negotiations were always going to be cat and mouse, they always were going to be, but we'll get a trade deal with the EU," said Nigel.

"We've got the best of both worlds - we're able to negotiate trade deals around the world now."

He admitted that the UK was "not yet match fit" because it had not had to negotiate a trade deal for 40 years, but said he believed the government was getting there.

The Brexiteer said there had been a "detrimental effect" from the COVID-19 pandemic but that he believed "we're on the right track" and are already seeing the benefits when it comes to fishing and farming.

"I'm prepared to put a substantial amount of money on with you that we will have that trade agreement by the end of the year," he told his brother.

But Ian said he was not so sure and that he believed the UK may have to agree to the EU's trade rules.

"This 'cake and eat it' we've been promised is nonsense - it's clearly making us worse off," he said.

Ian thinks the pandemic has shown how Europe needs to work together, and questioned whether the UK would get a "fantastic" trade agreement with "Donald Trump's America".

He also said he thought the UK was damaging relationships with its neighbours by trying to engage in fractious trade negotiations.

"We'll have no trade sovereignty and will have to take all the things we don't want for things we do want," he added.

But have their opposing views damaged their relationship?

They do not think so, with the pair finally agreeing on something - that their family and the nation has room for debate, which is something they said they would be doing over dinner next week.

Ian added: "We have to heal the rifts and understand as a country, and hopefully we'll come to a day when all our issues are settled."