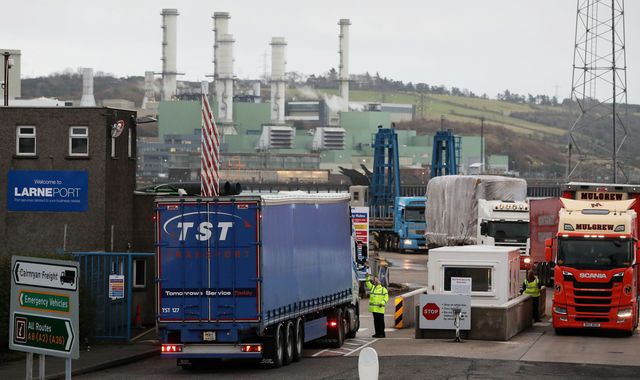 Boris Johnson has been accused of being "deeply dishonest" after it was confirmed that physical posts will be funded at Northern Ireland's ports ahead of the end of the Brexit transition period.

The UK government has "confirmed that it will urgently put in place detailed plans with the [Northern Ireland] Executive, which does include the physical posts at ports of entry", a Stormont committee has been told.

The comments came from Declan Kearney, a junior minister at the Executive Office.

He said the department had been given a briefing by officials on Monday to update them on the latest stage of the Brexit negotiations between the UK and the EU.

The prime minister told an event with business leaders in November that trade between Northern Ireland and Great Britain would not be subject to any customs declarations.

Pressed on whether there will be customs forms for trade, Mr Johnson said: "If somebody asks you to do that tell them to ring up the prime minister and I'll direct them to put that form in the bin."

He added: "There will be no forms, no checks, no barriers of any kind. You will have unfettered access."

The comments were contrary to his own government ministers' statements around that time.

Then, during the general election campaign, Mr Johnson claimed a leaked Treasury document about checks on the Northern Ireland border was "wrong".

Jeremy Corbyn, who was Labour leader at the time, obtained the document and claimed it proved there will be customs checks between Great Britain and Northern Ireland after Brexit.

Pressed on the document talking about "checks both ways", he said "that's wrong because there won't be checks".

Reacting to the news, Liberal Democrat Brexit spokesperson Alistair Carmichael said: "Johnson's government has failed to give businesses much needed clarity on this issue.

"It now seems Johnson was deeply dishonest with businesses when he previously asserted there would be no checks and businesses could put paperwork 'in the bin'".

Labour's shadow Northern Ireland secretary Louise Haigh said: "The prime minister made promises to people and businesses in Northern Ireland that he couldn't keep, and this is the reality of the deal he signed up to back in October.

"Instead of slogans what businesses in Northern Ireland need now from the government, above all else, is detail on what these new procedures will mean for them."

But the Cabinet Office said the government had "always been clear that there will be requirements for live animals and agrifood".

Northern Ireland will continue to follow the bloc's single market rules on agricultural goods after Brexit.

This came into effect at the end of January when Britain left the EU after 47 years of membership.

Mr Kearney said: "They have signalled that in order to implement the protocol for 1 January in a way that we all want which is of course is to avoid disruption to trade.

"Delivery on that infrastructure needs to start as soon as possible, and the British government has indicated that it will provide advice on the requirements and the funding to put that in place."

A Cabinet Office spokesperson said: "We have always been clear that there will be requirements for live animals and agri-food, building on what already happens at ports like Larne and Belfast.

"We want to work with NI businesses and the executive to ensure new admin procedures are streamlined and efficient.

"The protocol puts legal obligations on both sides.

"We are committed to complying with ours, just as we expect the EU to comply with theirs."