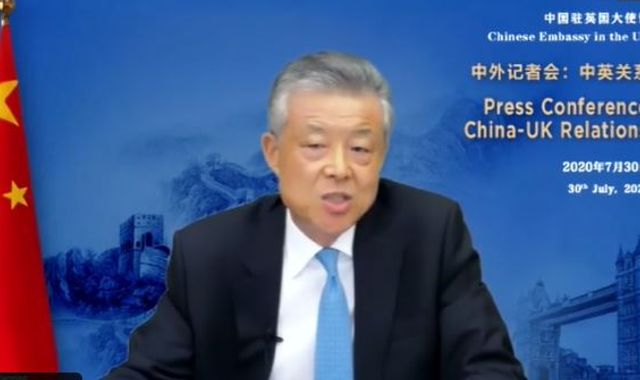 China's ambassador to London has accused the UK of "seriously poisoning" relations between the countries - and warned it would "pay the price" if it shunned Beijing.

Referring to disputes over Hong Kong, tech giant Huawei and alleged human rights abuses in Xinjiang, Liu Xiaoming said the UK was at a "critical historical juncture" in how it wanted to treat China.

He warned against allowing "Cold War warriors" - seemingly a reference to Donald Trump's US administration - to further damage relations.

And speaking during a live news conference broadcast on Twitter, he rejected claims of abuse against Uighur Muslims, condemned the decision to exclude Huawei from the UK's 5G network, and warned the UK not to interfere in Chinese internal affairs over Hong Kong.

"These actions have seriously poisoned the atmosphere of the China-UK relationship," he said.

"China respects UK sovereignty and has never interfered in the UK's internal affairs.

"It is important the UK will do the same - namely, respect China's sovereignty and stop interfering in Hong Kong's affairs, which are China's internal affairs, so as to avoid further damage to the China-UK relationship."

Mr Liu insisted his comments were intended to "threaten nobody".

"We just let you know the consequences," he said.

"People regard some of my remarks as threatening words. I think they quote my remarks out of context.

"But, if you do not want to be our partners and our friends, you want to treat China as a hostile country, you will pay the price.

Mr Trump's White House has pushed allies to distance themselves from Beijing, and US sanctions ultimately led to the UK's U-turn on Huawei's involvement in 5G.

Mr Liu said: "It's our hope that the UK would resist the pressure and coercion from a certain country and provide an open, fair, transparent and non-discriminatory environment for Chinese investment so as to bring back the confidence of Chinese businesses in the UK."

He claimed that after issues of Brexit and COVID-19 had been dealt with, "there will be unlimited prospects for China-UK co-operation in areas of trade, financial services, science and technology, education and healthcare".

"It is hard to imagine a global Britain that bypasses or excludes China," he said.

He added that he hoped the two countries had "enough wisdom and capabilities" to manage their differences "rather than allowing anti-China forces and Cold War warriors to kidnap the China-UK relationship".

Foreign Secretary Dominic Raab previously said UK-China relations would not return to normal in the wake of rifts between the two countries.

Despite Beijing's repeated denials, there have been widespread reports of Uighur Muslim people being held against their will in "re-education" centres, undergoing forced contraception and being subjected to a range of other restrictions.

(c) Sky News 2020: China says UK has 'poisoned' relations and will 'pay the price' if it shuns Beijing