After Army Accused Of Racist Tweet, Ian Collins Jumps To Their Defence

The British Army found itself at the centre of a Twitter storm after it was accused of using a 'blackface' joke. Ian Collins insists it's time we stop bandying around the term "racism" so lightly.

It was quickly deleted, but not before some users spotted it and questioned if they were making light of offensive 'blackface' dressing up. 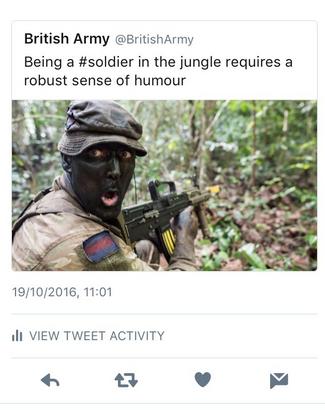 But speaking on his LBC show, Ian Collins let rip at the culture of branding jokes like this as "racist". Sometimes, he argues, they're just bad jokes.

"Apparently it's racist. Not even 'a bit inappropriate'. Not even 'ah, they could have done better.'

"Racist! Right up there, racist. The word you reserve for people who go around bashing folk over the head because they have a different skin colour or they're a different cultural ethnicity.

"That's racism. Can we just reserve that word for that? Where it kind of matters? So we take it seriously and we should.

"Not for some quirky ad."