Coronavirus: Boris Johnson says it would be a 'mistake' to go back to austerity because of pandemic 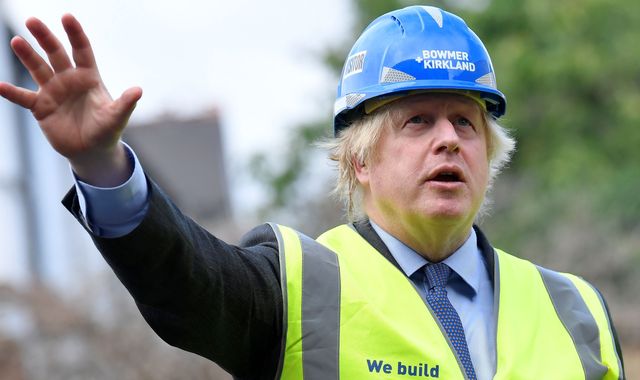 It would be a "mistake" to go back to austerity as a result of the coronavirus pandemic, the prime minister has said.

Boris Johnson told Times Radio there will be some "bumpy times" as the country recovers from the COVID-19 outbreak.

He said the coronavirus had been a "disaster" and an "absolute nightmare for the country".

But the PM said the government would be "doubling down" on its levelling up agenda and investing in the economy.

It would be a "mistake" to go back to austerity, Mr Johnson added, saying he would be setting out a plan to "bounce forward" following the pandemic.

The government has already promised a decade-long schools rebuilding plan, with £1bn for 50 projects and another £560m for school repairs.

Mr Johnson said an economic effort like the one seen in the US under President Franklin D Roosevelt as it dealt with the Great Depression in the 1930s was needed for the UK.

"You have to be careful and the chancellor will be setting out our plans in the spending review in the autumn.

"I think this is the moment for a Rooseveltian approach to the UK."

Speaking during a visit to Ealing Fields High School in west London to mark the schools announcement, Mr Johnson said he wanted to maintain an "activist, interventionist approach".

He said this would "get business to be confident, to start investing, to start taking people back on and start creating new jobs and driving new growth".

A total of 43,550 people have died in the UK with COVID-19, according to the Department of Health and Social Care.

Asked if he was still worried that total deaths and the infection rate remained too high, Mr Johnson said : "Every day I worry.

"Local hospital admissions are coming down, so are the death numbers.

"They are much, much lower than they were a few weeks ago and that is encouraging."

Speaking as government officials recommended the current lockdown measures remain in force in the city of Leicester for an extra two weeks, the PM said the "crucial thing" going forward would be "to crack down on local flare-ups".

Mr Johnson insisted now was not the right time to hold an inquiry into his government's handling of the pandemic.

"I totally understand that and we will.

"I happen to think that the moment is not right now, in the middle of really getting things going, still dealing with the pandemic, when everybody is flat out.

"I don't think the moment is right now for consecrating a huge amount of official time to all that, but we are learning lessons the whole time and we obviously will draw the right conclusions for the future."

(c) Sky News 2020: Coronavirus: Boris Johnson says it would be a 'mistake' to go back to austerity because of pandemic