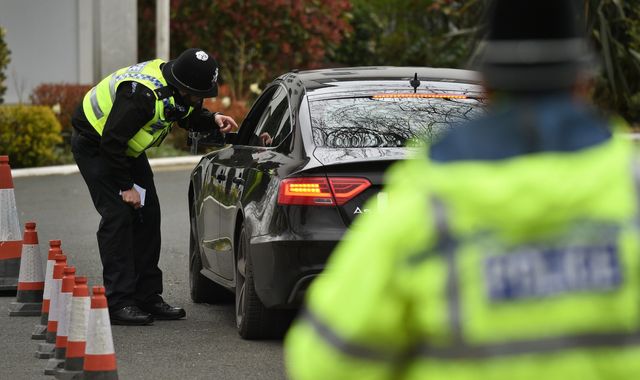 Vulnerable youths are being dressed up as key workers by drugs gangs to evade detection from the police during the lockdown.

The Children's Society told Sky News that young drug runners have continued to be used by "county lines" gangs since all bars, restaurants and shops have been forced to close and transport was heavily restricted.

Sources have told us that drug dealers have been dressing up as dog walkers and meeting in busy hospital and supermarket car parks during the lockdown.

It comes as Scotland Yard reveals around 10% of county lines have been shut down after the biggest ever police operation to tackle the drugs-trafficking phenomenon.

In November last year, the Metropolitan Police teamed up with several other forces in England and Wales to launch a nationwide blitz to take out illegal drugs gangs after a £20m funding boost from the Home Office. A further £5m was announced last week.

The growth in the exploitative trade that sees organised gangs moving drugs out of urban areas to smaller towns or villages has reached the point where there are between 800 to 1,000 drug supply lines actively in operation.

Met Commissioner Cressida Dick revealed how 87 of these routes have been taken out and several drug kingpins have been arrested.

In the six-month operation, 183 people have been charged with drug-trafficking. Of those, two-thirds were known gang members and have previous convictions for carrying weapons.

James Simmons from the Children's Society said: "We are seeing a move to use private hire car companies and taxi companies to move children. We're also seeing exploiters dress children up as key workers in order for them to avoid detection at this time."

"If they were being transported in trains, if they were in public spaces they'd be more visible and that's why we've seen exploiters dressing children up - using outfits that are for key workers so they can pass without being noticed - that's why we're also seeing them using taxis that no one is paying attention to."

Sky News understands that a common outfit would be a supermarket worker - and drugs are being sold in busy supermarkets and hospital car parks.

Children also dress as delivery drivers in order to do home drop-offs. The children's society says the public should be alert to children visiting addresses where there are no other children.

Dame Cressida Dick also said that the lockdown has been a challenging time for police, but it had made it easier to identify county lines runners.

Arrests have increased by 50% in lockdown, compared with the same period last year.

Commissioner Dick said: "Over the last year we have made significant progress in our fight against violent drug dealers.

"The close partnerships formed with colleagues nationally have been crucial to this success, and I am grateful to them all for the part they have played - even throughout the last 10 challenging weeks. Across policing the commitment to driving down violence has never wavered.

"Over the last year, we have developed a significant evidence base which shows how criminals use telecommunications to run their operations. We will work with whoever necessary to restrict the ability of these individuals to carry out this activity and destroy the business model of county lines entirely."