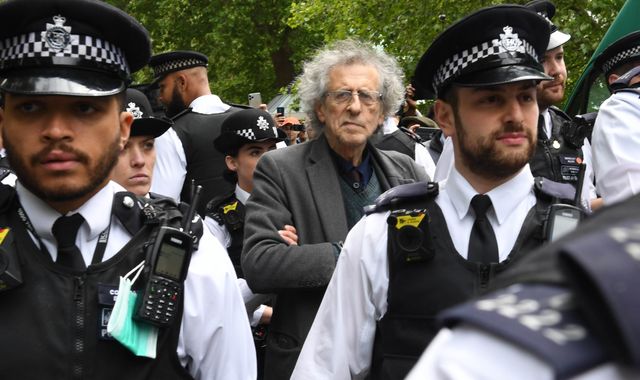 Jeremy Corbyn's brother is among 23 people who have been charged in relation to protests held during the coronavirus lockdown.

Piers Corbyn, who is the elder brother of the former Labour leader, has been charged twice under the Coronavirus Regulations 2020 for attending demonstrations on 16 and 30 May, Met Police said.

The 73-year-old's alleged offences relate to a central London demonstration against the government lockdown and another two weeks later following the death of George Floyd in the US.

The charges include breaking the government lockdown, assaulting emergency service workers, possession of Class A drugs and causing intentional harassment, alarm or distress.

On 16 May, 13 people were charged with breaking lockdown after protesters gathered across the country holding placards that said "tell us the truth - no more fake pandemic" and messages relating to 5G conspiracy theories and COVID-19.

They come from London, Milton Keynes, Northampton and Doncaster and range from 27 years old to 73.

During protests in London on 1 June, only one person was charged - an 18-year-old homeless man called Brendon Cummins - for assaulting an emergency worker.

In relation to Black Lives Matter protests in London on 6 June, two men were charged.

Christopher Scott, 28, of Southwark, is accused of assaulting two emergency service workers and Orson Shandilya, 23, of Harlesden, is charged with causing intentional harassment, alarm or distress and possession of a Class A drug.

Last weekend, when counter-demonstrations were held to "protect statues" of colonial figures and slavetraders called into question amid anti-racism protests, seven people were charged.

They include Andrew Banks, 28, who was jailed for two weeks for outraging public decency after he was seen urinating next to a memorial to murdered police officer PC Keith Palmer in Westminster.

The other charges in relation to 13 June include violent disorder and criminal damage, with defendants from Sunderland, Hertfordshire, Walsall and east London.

Prime Minister Boris Johnson has urged people not to defy lockdown rules and attend any type of protests, as currently only groups of six people are allowed to gather by law.

On Friday, the UK's coronavirus alert level was downgraded from four to three, which means health officials believe the virus in general circulation but transmission is no longer high or rising exponentially, and there could be a "gradual relaxing of restrictions".