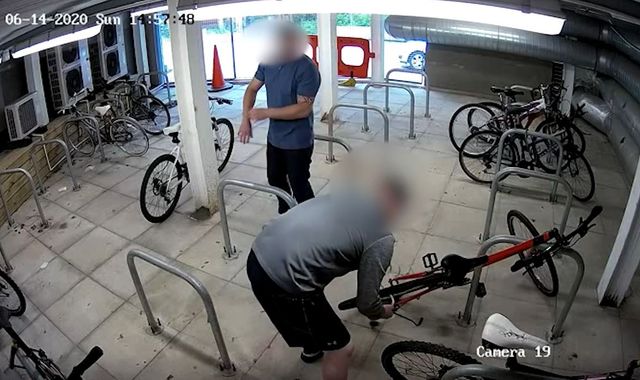 Police have arrested 12 suspected bike thieves who are thought to have targeted hospital staff during the coronavirus crisis.

Officers from Northumbria Police made the arrests after a sting operation, following a spate of thefts at Newcastle's Royal Victoria Infirmary.

Operation Monty was set up by the city centre policing team, which involved placing a bike in a prominent position and plain-clothed officers monitoring it.

Footage released by police showed two people stealing bikes from the hospital by attacking a lock with a tool.

The operation was run several times over the past two months and helped lead to the 12 arrests, while appeals for information also prompted members of the public to offer donations to the bike theft victims.

Officers also stepped up patrols in the area as part of Operation Monty, which Neighbourhood Inspector Karen Madge said was the least the force could do to help the hospital staff.

"Our doctors, nurses and hospital workers have been doing an incredible job during the coronavirus pandemic and have put themselves at risk to save the lives of others," she said.

"It has been absolutely appalling to see these NHS heroes targeted by thieves and we have been putting measures in place to prevent this from happening and to safeguard their property."

She added: "One of those measures was Operation Monty and I am delighted that this sting operation has been such a massive success, securing property and bringing suspects in to custody."

Sky News is supporting the DEC's new appeal to raise funds for lifesaving aid, such as clean water, soap, PPE and food, to help save lives as coronavirus hits refugee camps and war-torn countries like Yemen, Syria, Somalia and South Sudan.