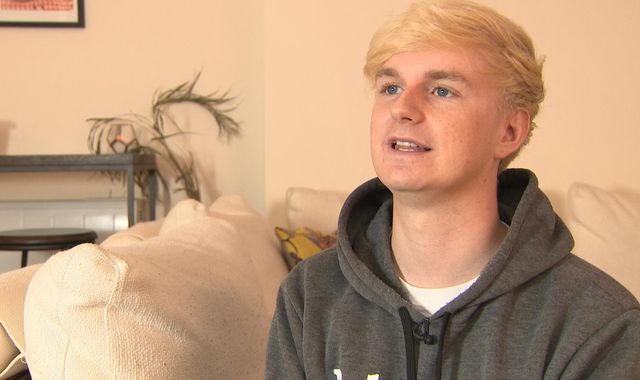 A British man who was placed in quarantine earlier this week after returning home from Australia via China has spoken to Sky News about his ordeal.

Craig Dillon, from London, was at hospital for 12 hours while he was undergoing tests.

The coronavirus outbreak has so far killed 18 people and infected nearly 600. Mr Dillon's test results eventually returned as negative for the virus, and he has since been told that he may have pneumonia. But here, he shares his story:

I got back to the UK on Monday after a holiday in Australia and Thailand, using a connecting flight from Guangzhou, China.

I had been experiencing flu symptoms for about a week to two weeks.

I went off to work at 10am early Wednesday, but I was still feeling flu-ey and it started to get worse and worse.

I eventually called the NHS 111 number after feeling extremely ill, and faint.

They told me to go to hospital immediately.

When I got to St Thomas', I went into A&E and I told them my symptoms and that I had been to China and Thailand.

The doctor literally dragged me outside the hospital near the ambulance bay and put a mask on me.

I was pointed toward a door that was a separate entrance to the hospital and led to a quarantined room and told to go there.

I waited there for 30 minutes on my own. It was quite scary.

I could hear lots of going on outside as people were doing checklists. Then a nurse and doctor came in in full hazmat suits.

They were sealed in the room with me for two hours as I was given a series of tests.

It was hard to understand what everyone was saying because they were all wearing masks.

They ran multiple blood tests, mouth swabs and nose swabs and had to make notes on paper and tape them to the glass to communicate with people on the other side.

They had to wait with me until the test results came back.

Luckily, my results were negative and I probably didn't have coronavirus.

If I had it, they definitely would have caught it.

But the problem is that I landed at Heathrow and met all my friends and went to work and to Starbucks.

There should have been something more at Heathrow that could detect my temperature was really high - but I guess we don't have that technology yet.

(c) Sky News 2020: Coronavirus: 'They dragged me outside and came back in hazmat suits'