Coronavirus: Vast majority of the population at risk if there's a second wave, top scientist warns 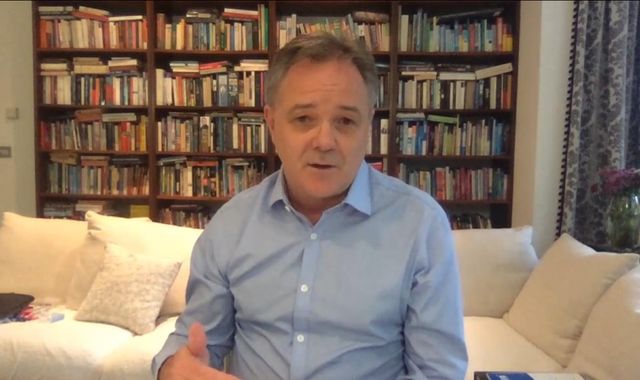 One of the government's scientific advisers has told Sky News that people have to assume a second wave of coronavirus "is coming".

Sir Jeremy Farrar said that, although lockdown in the UK has suppressed COVID-19, it has not changed the fundamental way it transmits between humans and "we have not got rid of it".

The senior member of the Scientific Group for Emergencies (SAGE), which advises ministers on the pandemic, warned the vast majority of every population in every country remains susceptible to coronavirus - and if there is a second wave, many would be at risk of becoming infected.

Speaking on Sky's After The Pandemic: Our New World, he said: "This is now a human endemic infection. In the UK and much of the world, actually only about 6 or 8% of people have seen this infection and we hope are immune.

"That means over 90% of people have not seen yet this infection and are probably still susceptible to it."

He added: "What countries have got to do is learn lessons from the first wave.

"Put in place things we didn't get right in the first wave, and make sure when we come into the autumn and the winter this year when other infections - influenza - will be circulating as well, we have everything we need in place so we can reduce the impact of that second wave."

Former chief medical officer for England, Professor Dame Sally Davies, said some nations that have got the virus under control have had more outbreaks and she said there could even be a third wave coming.

She said: "The countries that seem to have got rid of it still have cases popping up, and while it's rattling around the world it will be very difficult to get rid of

"If you think about flu, it's in the northern hemisphere, then it goes to the southern, it may mutate, but then it comes back round. And it just goes round year after year with different strains, and different changes."

Dame Sally added: "It's not gone away in Britain. We need to continue with the planning and the work that's happening because, though I'm not a forecaster or a modeller, I would prefer to be prepared for a second, and even maybe a third wave.

"When we look back at 2009-10, the mild flu pandemic, we had three waves and so we can expect more of this. The question is - is it a big wave or is it because of the way we handle it, lots of little waves? It will go on until we are immune."

Sir Jeremy, who also serves as director of the Wellcome Trust, also said he was "confident" there would be a successful vaccine "soon", but cautioned: "What soon means I don't know."

He said: "We still don't have vaccines for TB and malaria. We can't put all hopes on a vaccine. Yes I'm optimistic, yes the science is progressing incredibly quickly all around the world, including here in the UK, but we can't assume we will have a vaccine."

On Thursday night at 8pm, Dermot Murnaghan will be hosting After The Pandemic: Our New World - a special live programme about what our world will be like once the pandemic is over.

The programme will include an exclusive interview with Prince Charles.