Coronavirus: Why do UK and Spain disagree over quarantine? 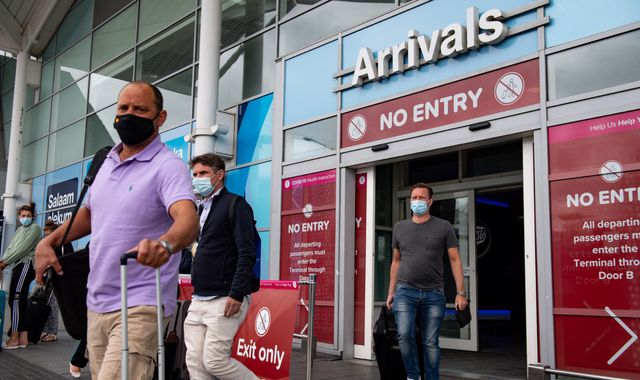 A diplomatic row has blown up after the UK government changed its advice for travellers heading to Spain and reimposed a 14-day quarantine on anyone returning home.

Sky News looks at both sides and what they say about the new restrictions.

How prevalent is the virus in Spain?

Spain has had 272,421 confirmed cases of COVID-19 since the pandemic began, according to Johns Hopkins University.

That makes it the 12th highest country by number of infections in the world - four places below the UK.

Lockdown measures initially brought rates down, but fears are growing of a resurgence in Spain as the two-week infection rate is now 39.4 per 100,000 people - a rise of 260%.

Why does the UK think it's dangerous?

Foreign Secretary Dominic Raab said he took the decision to put Spain back on England's quarantine list on Saturday night after receiving data the previous day which showed a "big jump" in cases there.

Scotland, Wales and Northern Ireland have all followed suit.

For comparison, the area in the UK with the highest two-week infection rate is Blackburn and Darwen - which recorded 143 cases per 100,000 people in its latest data release.

In Spain, one area is well above that and several others are not far off. Aragon's rate is 237, with Catalonia (including the popular tourist destination of Barcelona) on 111.6 and Navarre on 110.5.

But most of the rest of the country is seeing much lower numbers, particularly the Balearics (8) and Canaries (5.8).

Despite that, the UK added the islands to its list of places it advised Britons against travelling to on Monday.

What has been Spain's response?

Madrid has been pushing for Britain to exempt the Balearic and Canary islands from its quarantine policy - given it says there are far fewer cases there than in some parts of the UK.

Spain's tourism association - known as CEHAT - has also offered to pay for tourists to take coronavirus tests and called the quarantine decision "illogical" and "unfair".

Is it possible to have different regional policies within a country?

The UK has so far not bended to the calls to have policies for specific regions rather than across a whole country.

Lord Bethell, a health minister, said on Monday that "within individual countries, there is no way for us to control intra-country transport" so it is "very difficult" to have regional exemptions.

But Germany has taken a different approach, its foreign ministry only advising against "unnecessary tourist trips" to Aragon, Catalonia and Navarre.

How is the UK's blanket approach going down with businesses?

Holiday firm TUI has called for the government to take a more targeted approach amid an industry backlash.

The company's UK managing director Andrew Flintham told Sky News a more "nuanced" attitude was needed and it has been forced to cancel flights to mainland Spain until 9 August.

Other travel companies worry it will spark a wave of cancellations - putting people off holidays abroad at a time when they are desperate for sales.

(c) Sky News 2020: Coronavirus: Why do UK and Spain disagree over quarantine?