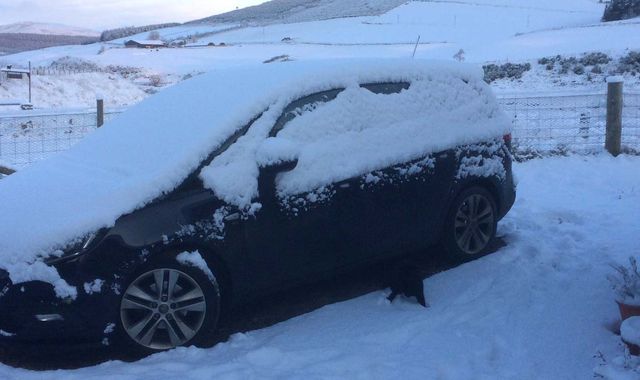 Drivers were stranded for hours on a motorway overnight after heavy snowfall and icy conditions hit some parts of the country.

Temperatures plummeted to -4C (24.8F) on Monday night amid the first major snowfall of 2020.

Part of the M74 in Scotland was shut, with some motorists reporting on social media that they were stuck for several hours.

Police said parts of the motorway had been closed between junctions 14 and 15 northbound for some time overnight.

The Met Office issued yellow warnings of snow and ice for most of the country and an ice warning for the North East - which lasted until 11am on Tuesday.

One motorist, Cheryl Burnett, said it took her six-and-half hours to drive from Dumfries to Glasgow and described being stranded on the motorway for four-and-a-half hours as a "terrifying experience".

Some drivers shared their experiences on Twitter, with one user writing: "I'm stuck on the M74 just north of Beatock, I've been here about a hr, no sign of gritters or anyone who can tell us what's happening."

Another tweeted Traffic Scotland for more information, asking: "Any idea what's happening on M74 heading to Glasgow been stuck for over am hour and a half between junction 15 and 14".

Traffic eventually started moving again slowly at around 2am after gritters were sent out.

Traffic Scotland said there were very snowy conditions across the trunk roads network on Tuesday morning and urged people to drive with care.

Police in southern Scotland advised people to leave extra time for their journey and drive according to the conditions.

The UK is experiencing a cold spell, with milder weather expected to arrive on Wednesday.

The Met Office says it will be a bright start in the south and east on Wednesday, with skies turning cloudier later on.

Wintry showers in the North West will be followed by persistent rain through the afternoon.

The weather remains unsettled from Thursday until the weekend, with spells of wind and rain at times, the rain heaviest for northwestern areas.

Southeastern areas will be generally drier.

Sky News' weather producer Christopher England said the start of this week was "not a terribly wintry spell, just a little bit of sleet and snow, mostly on the high ground - more the mouse from the house rather than the beast from the east."

He added: "As for the rest of the week, it will be unsettled, with bands of rain spreading from the west(ish), strong winds at times and it will be pretty mild for the middle of winter."